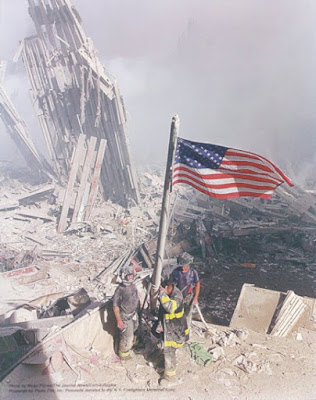 Recently we met several new acquaintances at a gathering. One interesting conversation with a retired Navy vet centered on flag etiquette. He was well versed in how the American flag should be treated, respected and displayed. I already knew some things, having worked with my daughter’s Camp Fire group earning a badge learning how to perform a formal flag presentation ceremony but my new friend knew way much more than I. Apparently there’s a volume of rules that applies to the correct way to handle, display and retire the American flag, the existence of which is largely unknown to most Americans.

Several days after my enlightening discussion with our new friend, I saw the news about a football player who refused to stand at attention at the playing of the National Anthem. Since this has become the most recent uproar and everyone seems to have an opinion, I thought today, the anniversary of the day the Twin Towers were brought down and thousands of Americans were murdered by terrorists, I’d weigh in.

One of the points my knowledgeable new friend stressed was in regard to not allowing a tattered, faded flag fly. Worn out flags need to be properly retired. Not just thrown away. There are specific rules and protocols that cover how this ought to be done. After witnessing the disrespect one rich, spoiled, enabled millennial passionately demonstrated, drawing media attention to himself and his ‘cause’, I started noticing other incidences of flag dishonor.

Some public schools, you know the institutions that are paid for by American tax dollars, are now choosing to forbid the displaying of the flag at sporting events. It might offend people attending who aren’t American.  Or something.

Other schools, again paid for by hard working Americans, are sending home ‘opt out’ letters to parents allowing that students who do not wish to pledge allegiance to the flag of the country where they are living and going to school could just stand silently or play games on their cell phones. Those handy devises they have because they came here to reap the benefits of the American way. The way represented by the Red/White and Blue.

During our recent 4th of July Independence Day celebrations, honoring the day that marks the beginning our path to becoming a nation of our own, many individuals were forbidden to fly the grand ole flag. Ordered so by small tyrantical government agencies. Seems that flying the flag breaks rules and ordinances. Can’t have that, you know.

So, thinking back to the conversation about how a worn out flag ought not to be displayed I thought of something I could have contributed to the discussion.

It is pretty clear for me that we are already at war with forces determined to fundamentally reorder the American way of life. Patriotism, honor, and loyalty to a real and distinguished culture, bought and paid for by the shed blood of countless numbers of Americans over many decades is being replaced with a concept known as globalism. Globalists do not believe in sovereign states or countries. The world ought to just be a melting pot, open to anyone and all, regardless of cultural disparity.

Amazing how much can happen in fifteen years. Grade schoolers grow up and graduate from college, a man, not even old enough to be president on 9/11/2001, can rise to power and spend eight years apologizing to the world for Americans, can tell us we are lazy and racist and that we never built our lives ourselves. Can live like a king on the American taxpayer’s dollar and promote a candidate who believes fully half of all Americans (if you want to believe in polls) are deplorable.

In fifteen short years we can go from being a proud to be American unified people that reverently displayed a flag damaged by the devastation brought down in one horrific day, to being a nation afraid to display the flag at all. Not on our homes or in our schools.

It did not escape me that until the media pointed it out, there was no American flag displayed at the Democratic Convention. Is that a thing?

Fifteen years, the last eight of which put us on the fast track to losing what has always been the foundation of American Exceptionalism, (the envy of the rest of the world and the reason people want to come here), has taken us from being willing to stand for something to cow towing to those who would destroy us and therefore have left us standing for nothing.

Unfortunately, in the process of removing a society’s devotion to the concept of a way of life, which is the definition of patriotism, a real and present danger rears its ugly head. Once the prosperity of a proven successful way of life is replaced with a populace that never knew the key to prosperity is founded in unity, not diversity, the way of life dies and takes its prosperity with it. The golden goose dies.

For weeks and months even, after 9/11/2001, people freely and proudly flew their American flags on their homes, their cars, their businesses. For a handful of years America was still a country that represented a people unashamed to be called American.

If you’re looking at the continuum fifteen years is but a teardrop in the ocean. And yet so much can change in a decade and a half. Rules and protocols become meaningless as new concepts rise up to replace the old. And it has ever been thus. Mighty nations emerge, soar and then crash into oblivion.

If all I had was a tattered flag, and I couldn't get another one, I think I’d still fly it anyway. If the flag is the symbol that represents a country, then perhaps a beat up flag is poignantly fitting for a country that has allowed itself to be beaten.