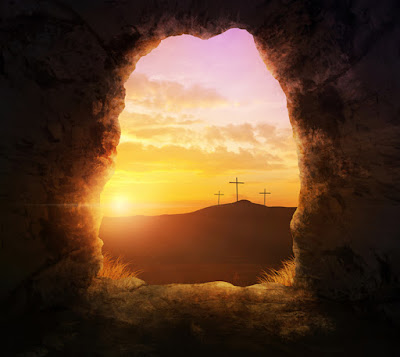 (Luke 23:55) And the women, who had come with him out of Galilee, followed after, and beheld the tomb, and how his body was laid.  (23:56) And they returned, and prepared spices and ointments. And on the sabbath they rested according to the commandment.  But on the first day of the week, at early dawn, they came unto the tomb, bringing the spices which they had prepared.  (24:2) And they found the stone rolled away from the tomb.  (24:3) And they entered in, and found not the body of the Lord Jesus.

When I try to imagine being one of those women on that horrific longest day - the ‘Sabbath’ after Christ was crucified - the agony of waiting in the paralyzing silence of defeat, I temporarily set aside knowing the rest of the story - the great good ending. I try to fully experience their grief and dismay, the crushing weight of unanswerable questions - the frustrating unknowable.

I do this because I need to embrace, firsthand, the fear that they must have felt, the confusion, the despair. I still myself, eyes closed, and put myself there, sitting with them. No one able to speak, hopelessness settled in around them slowly sucking the oxygen out of the space. My heart feels like it’s being compressed by a vise.

I can’t stay there too long or I’d become dysfunctional. I only need a glimpse of what they must have felt so I can confirm the old saying - it’s always darkest just before dawn - as a solid truth not just a good sounding platitude.

Because I do know the rest of the story, I can also imagine the shockwave that must have shot through, head to toe, those faithful women who returned to the tomb to finish the job, to pay their respect and demonstrate their love for this man whom they had believed was the Son of God and were not prepared for, nor understood what had to happen.

Have you ever been there? So immersed in fear and dread of the unknown, convinced you are done for, at the mercy of great evil, then in a flash you are rescued? One minute it’s nothing but darkness, the next minute all is light - exquisite relief.

I have. I’ve been there many times in my now officially long life. While it most certainly is darkest just before dawn, there is another truth - dawn does come - and always right on time.

When it seems that evil has finally won the upper hand, I go back in time and sit for a few minutes with the women who found the tomb empty. Then I fast forward to the happy ending of Christ risen. The war is won. Until He returns we must continue with the small battles, the minor skirmishes with evil, that test our mettle, that keeps trying to distract us away from faith, when we must sit in the darkest dark and wait for dawn, not just believing, but confident it will come.