(Colossians 2:8) Take heed lest there shall be any one that maketh spoil of you through his philosophy and vain deceit, after the tradition of men, after the rudiments of the world, and not after Christ:

Auri was estimated to be a year old when my granddaughter and I found him three years ago at the local shelter. Though he definitely stood out from the other motley inmates, it was his soulful brown eyes that sucked us in and won him his freedom. He is a good dog, if somewhat neurotic, and a vigilant watch dog with a bark much more intimidating than his size. 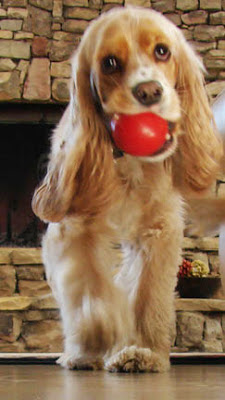 Auri can run like a greyhound. A primal instinct in the spaniel in him compels him to hate squirrels and when he spots one on our morning walk, he can go from zero to sixty in point five seconds. Thus the squirrels remain on high alert and scarce in the mornings until the resident terror has passed. Whoa be unto the one that forgets and finds itself stranded out in the open between two trees. Auri has never actually caught a squirrel, though there have been some very close calls. I’m not sure he’d know what to do with it if he did. Squirrels can fight back when cornered. But Auri doesn’t know this and he also doesn’t think ahead about the what ifs any more than he remembers yesterday. He’s a dog, on a mission: get small rodent with fluffy tail.

Like all dogs, Auri has basic instincts and needs. Shelter, food, water, affirmation, feral joyful running to expend natural energy, chasing squirrels up trees and playing fetch with his ball. Here’s where the neurotic part comes in. Auri is obsessed with his ball and is determined that we, his people, will also be obsessed with it. Once engaged he will not quit on his own. He brings it, drops it at the feet of his victim and then stares at the ball, every muscle tensed, tail wagging in slow measured waves. His focus is so intense, the owner of the feet has no choice but to comply, pick up the ball and throw it. Ten seconds later, the ball is dropped again, Auri back in position. We’ve never tested how long Auri would repeat this action, I personally believe it would be a marathon, possibly eligible for the Guinness Book of World Records. Alas, Auri’s fetch partner usually ends it long before Auri is ready. The only way to end it is to hide the ball.

This type of behavior is endearing in a dog but annoying in humans. This kind of focus is referred to as OCD–obsessive/compulsive disorder. I don’t know if this is a relatively new mental problem or an old one that has only just been labeled in the modern science of human psychology, but it seems to me many more people suffer from varying degrees of OCD than ever before. OCD in its mildest form manifests most often as “selective perfectionism”. At its worst it is a debilitating, overriding autopilot that prevents the mind from thinking in any other way but closed loops. Advanced OCD renders one essentially mentally crippled and not only pre-programmed but nearly unteachable.

In the last decade or so the identification and recognition of OCD has made it a household word–almost a joke as well as a commonly accepted character trait. Who doesn’t refer to his/her own “OCD” tendencies from time to time as the excuse for some minor obsessive behavior? I don’t know if it has to do with more people being born with mis-wired brains or if there is something in the environment that is slowly poisoning us and messing with our brain activity.

From the spiritual side, I could take a leap and determine that what seems to be a growing physiological problem can be traced to something much more sinister. Call it a type of spiritual conspiracy theory, if you must.

If you wanted to own a population, transform it into a pliable, subservient, controllable society, the simplest technique would be to inundate the masses with exciting distractions, enticements, pandering to base desires, coaxing them into little addictions and passion for acquiring and embracing every new thing. Maintain a tight schedule of new things coming successively in short timeframes to increase anticipation to frenzy levels. Flood the populace with 30-60 second fictional vignettes 24/7, keeping these in the forefront of consciousness and embedded in the subconscious until natural attention span can be reconditioned and reduced to a minute or less which effectively short-circuits any critical thinking.

Make idols out of beautiful delusions, disguise truth with a thin glittering layer of better-than-real lie until expectations for reality are unilaterally elevated to the newly created illusions of perfection.

Through these strategies you can, within as short a time as a generation, redirect every brain wave in tune to the same frequency and your new pets will be sufficiently stunted, limited and compliant to whatever you wish for them to do. You need not worry that they will be able to think beyond the preoccupation of the moment. They will be so obsessed with sterile irrelevant minutia they will have no need for recollection of the past or hope for the future.

You will have created Generation OCD, that, like Auri, just wants to play fetch over and over and over until you, the master, finally decide when to hide the ball.

Failing in his frontal attacks upon the child of God, Satan often turns to more subtle means of achieving his evil purpose. He resorts to devious methods in his attempt to divert the Christian from carrying out the task God has committed to him. He often succeeds by involving the saint in some other lesser occupation and so distracting him. ~ A. Tozer
Posted by meema at Wednesday, January 23, 2013