Every year, a pair of Canadian geese claims the small island in the middle of the pond to build their nest. This process begins with several pairs duking it out for a week or two to determine who gets the prime real estate. Once the decision is firm, everyone else has to leave because the male goose will not allow anyone on or even near the pond while the female is nesting. 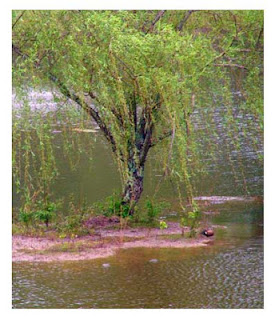 This begins sometime in mid March or early April, depending on how long winter persists. But it is always still cold so the mum, who sits on the nest almost 24/7 sometimes must endure weather extremes, such as freezing temperatures, torrential rain, hail, lightening. She does only what she has to do to survive while dad patrols the pond and fusses at her when she dares to take a short break for food and drink. It’s a hard gestation period by any standards, human or animal, in my opinion.

But stalwart sitting on the nest and protecting the pond, keeping all comers at bay, until the goslings are born are not the hardest jobs for mother and father goose. While the tiny island affords some degree of safety for the eggs from marauding nocturnal predators, there is little protection once the fluffy yellow babies are escorted around, being taught how to fend for themselves. When the babes are out and about, the real dangers and odds against their reaching maturity increase exponentially, from everywhere. When they are still very small, big mouth bass can simply pick them off from underneath. Hawks and crows start stalking and waiting for the perfect opportunity to swoop in. Sometimes in the middle of the night a goose ruckus wakes me up and I know there is a life or death battle occurring out on the dark water. I don’t even want to know what that means and who the villain is because then I would have to admit how truly raw, dramatic and very close real nature is.

Some years, like in 2012, the babes survive. A brood of five made it to adulthood. Another family, with four chicks managed to keep three. This year, though, there were six little hatchlings one day and then a couple days later–none. Nature happens.

This is the cycle of life on the pond, and in a greater sense, life in general. But this year, for some reason, I have a heart for the mother goose, who sat so stoically on the nest through some terrible spring storms and late bitter cold. The water has never been higher and wisely she had built her nest at the highest point closest to the trunk of the willow tree instead of on the edge as usual otherwise the whole thing would have floated off early on.

I know that nature has a natural rhythm and it’s foolish to intervene. I know that the cycles, animals that live and those that don’t, keep the ecology in balance. I know that when the geese get old enough to walk around the pond all day they make a terrible mess so I don’t really want them to get out of hand. Even so, though I am more than resolved to let nature take care of itself as God established the perfect order, still in all, I felt bad for mother goose this year.

The tug on my heart for her somehow leaves me exceptionally grateful for all my blessings  this Mother’s Day.

(Matthew 10:28) And be not afraid of them that kill the body, but are not able to kill the soul: but rather fear him who is able to destroy both soul and body in hell.  (10:29) Are not two sparrows sold for a penny? and not one of them shall fall on the ground without your Father:  (10:30) but the very hairs of your head are all numbered.  (10:31) Fear not therefore: ye are of more value than many sparrows.