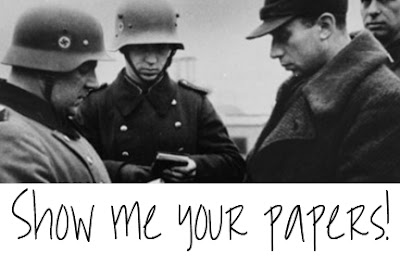 It was time to renew my driver’s license. Sometime within the seven years since I had last renewed, the laws changed in my state. Regardless that I have had a legal, government issued ID for the past 29 years, the one that has served as legitimate proof of who and what I am, I essentially was required to start over.

In order to renew the license that worked just fine until my birthday, I had to gather to provide, a certified copy of my birth certificate, my marriage license, two forms of mail addressed to me, my expiring license, and my social security card.

No problem. Except when I went to retrieve these important documents I found that the lock box they have been in for decades was still stashed in a box somewhere in the basement from the last move six years ago. Rather than spend a day digging through boxes, I chose to go online and request ( pay for) my birth certificate and my marriage license. I figured my Medicare card that has my SS# would suffice to show that I am legit. The birth certificate came but the marriage license was not forthcoming.

I decided to take my chances. After all, I reasoned, I have the printed receipt that I have ordered the marriage license. My other current docs show my name.

But no, see, they have their rules and the law, regardless of all the ways the law is absurd, must be followed. I was issued a temporary renewal and given 120 days to produce my marriage license.

This exercise in futility formed a knot in my stomach. I had to stop and reflect on what has happened to this country once the icon and champion of freedom. Not to mention that common sense now seems to be missing in action, the reality of where we are now (and promises to worsen) offer a pretty bleak future. IMHO. But then I grew up in a time when individualism and the right to think and question absurd impositions on those rights was still viable. Now we are expected to lock step without question, to be herded into long waits in line to be body cavity searched just so we can board an airplane even as those who historically have professed to do us harm are allowed to work in sensitive areas of the same airport.  How does that make sense?

In all fairness, I tried to find justification for what I had to go through to prove who I am. There certainly are any number of folks who have been given the green light to enter and live in this country and many of them have devious intent. No one with any sense at all, common or otherwise, could deny that.

But still, I have to wonder why, those valid citizens, who have been more than vetted, where years of precedence and multiple kinds of documentation prove them, still must be forced to produce even as so many, who have no such proof and documentation do manage to get their IDs too.

Nonsense is full of irony. In order for me to receive a certified copy of my birth certificate, I had to upload a scan of my .... wait for it...

You can’t make this stuff up.

What you need to know is that none of this makes sense unless you understand that we are being conditioned. It’s worked before. 1938 Germany and Russia come to mind.

We, as Americans, have been carefully taught that America can never fail. It’s too big, too grand, too righteous.