No matter how wrong things go, how much damage done, lives changed for the worse by decisions made and implemented, we still assume that letters attached to the end of someone’s name denotes some capacity of superiority over the rest of us. The letters are supposed to confirm and assure us that we can trust the bearer of the title afforded him/her by the designation. 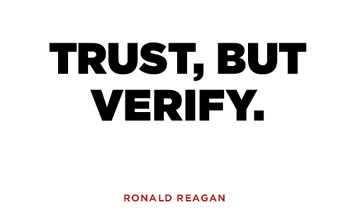 And so we trust that anyone who has earned the creds has done the hard work and thus has to know more than we do, and ought to be in charge of determinations that impact us.

Unfortunately it is an assumption that doesn’t always add up or apply but we never seem to learn that it’s okay to ask questions and vet the history of those who have been awarded authority and power. Reagan is quoted as saying, “Trust but verify.” Not a bad strategy.

You see, the official title in a person’s name does not denote integrity, common sense, fairness, or even intelligence, for that matter. It only announces that one has done the bookwork, the studies and passed the tests and criteria as designed by other credentialed people. History reports examples of many highly unscrupulous, un-smart people who were able to pass tests and get papers handed in and then rise to lofty positions because they had the official creds.

When you sit in front of a doctor, essentially handing over your life to his abilities, you can only hope he earned his doctorate at the top of his class. But what if he got it by the skin of his teeth and a small amount of sleight of hand? Perhaps he has not a smidgeon of intuitiveness about the vast variety in the human condition and how different diseases manifest in different people. Perhaps he is mostly just a pill pusher.

When you swallow the drug that the doctor prescribed, you want to trust but you only hope the credentialed pharmacist put the correct pill in the bottle.

When you are faced with a legal problem you sit in front of a credentialed individual licensed to practice law and you only hope he or she actually cares about your problem and is committed to being your advocate and does not simply see you as a way to fund his or her next vacation or run for political office.

When you start your car or push the button on the elevator or turn on your microwave, drive over a bridge or boot up your computer, you automatically assume the credentialed engineers that designed all the components, knew that you would be safe from harm while engaged in using the results of their expertise and that those who watch over such things are qualified to do their jobs.

Unfortunately, credentials do not override the human factor and humans, regardless how learned, prove over and over again that the decisions of those who are put in charge, the ones with the letters behind their names, can and often do screw up, to our detriment. Sometimes even on purpose.

Drugs often hurt more things than they help but it’s okay because the credentialed chemists have a mandate to quickly put out new drugs to boost sales and thus credentialed attorneys reap the benefits of harmful death suits.

Lead is bad, in our water and our environment, so is mercury and asbestos, but there was a time when credentialed product designers freely used these poisons in paint and vaccines, until, one day, other credentialed folks determined people were negatively impacted and changed the rules.

Highly credentialed scientists and engineers have no idea where tons of melted deadly nuclear fuel at Fukushima has gone in the last five years nor any idea how to find and contain it or what the long lasting ruinous effects will be. Other credentialed people manage to keep this important information from the masses lest this knowledge might negatively impact global commerce. The uneducated, uncredentialed do not need to be bothered with such complex information. Their attention needs to be focused on global warming instead.

Credentialed politicians make laws for the rest of us while exempting themselves.

So, bottomline, on any given day, those who have been voted for or hired and assigned to make the rules for the rest of us, may or may not know what they are doing, may even have dark agendas designed to elevate themselves over us and that exposes a reality about humanity in general. We just don’t know. We hope, we trust, we count on those who claim to know more than we are as good as they say they are.

The disconnect here is that accountability is missing in action nowadays. Credentials should not mean that bad choices and decisions that damage others is a free pass just because. Even the highest decision maker in the land should be accountable. But that’s not how it works anymore.

One day, though, there will be accountability. For everyone.

(Hebrews 4:12) For the word of God is living, and active, and sharper than any two-edged sword, and piercing even to the dividing of soul and spirit, of both joints and marrow, and quick to discern the thoughts and intents of the heart.  (4:13) And there is no creature that is not manifest in his sight: but all things are naked and laid open before the eyes of him with whom we have to do.
Posted by meema at Wednesday, July 06, 2016