A Time For Everything 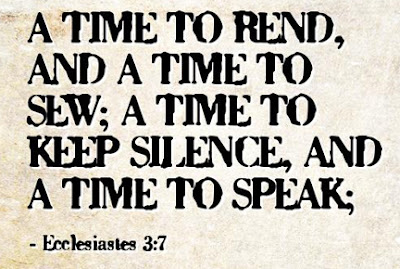 Election fatigue is starting to fray nerves and make otherwise calm people lose their self control. There may have been a more contentious, outrageous, uncivil presidential election in our past but I don’t recall one, at least not since I’ve been paying attention.

The year I turned 21 I cast my first vote. It was 1968.  I guess I had an opinion, I’m sure I had not really studied the two candidates - Nixon and Humphrey. I voted for Nixon because. Because why? I can’t tell you. Maybe because he was the Republican? Whatever. I was not an informed voter and yet I voted anyway. It made me feel grown up.

This go round, while gathered in groups, whether in person at events and parties, or virtually on social media, people cannot help but comment and say what’s sitting up top on their conscious minds. The Internet and unlimited access to information has made it possible for everyone to be as informed as they wish to be.

I live in a decidedly Red community so most of the comments are not especially kind to the Democratic candidate. There is much frustration  that cannot be contained. So much is blatantly obvious, to those who wish to see, the angst about how incredible it is that so many misdeeds and lies can be ignored feels like a bad case of heartburn.

Frankly, I don’t know how bad the information has to be to be considered game changing. If I had to guess I’d say those who are shocked and disillusioned will simply stay home rather than vote for the opponent. And that is always game-changing when the numbers are reportedly neck and neck.

How will it end? Can it end well and peacefully? Will the whole truth finally be allowed to come out? Will crime be exposed and criminals be prosecuted? Will the elite be held accountable for the many things the rest of us would be put under the jail for?

Maybe, maybe not. Regardless what happens, even if the worst of the worst is exposed, there are many who will still side with, defend and make excuses for the one they were duped into believing was who she has claimed to be.

Historical note: there are still many, to this day, who make excuses for Nixon. Who say he was set up and that he would have been a great president if not for a silly made up scandal. I’m not like that. When I find out something is irrefutably true, I don’t hang on to my position just to save face. I say something until the time for speaking is done.

But well done is better than well said - so I do something. Click if you dare

When a truth must be said, it must be said. To remain silent for the sake of maintaining civility is to deny that there is a time for everything.

When stakes are high and eyes are still blind is no time to remain silent.