Blame it on the Ukulele 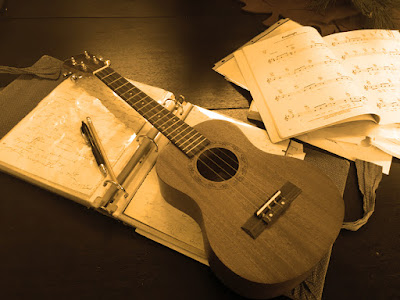 As I have aged, having suffered through the first four stages - denial, grief, anger, negotiating, I now ease into acceptance with a small residual of resistance. I can’t seem to go gently into that good night. But then, I’m nothing if not a rebel.

Nevertheless, I’ve been forced, by the mounting reality of my physical limitations, to at least admit that I am not what I used to be and those activities that were once second nature to me are now impossible if not alien. Not to mention that the bulk of my relevance here has greatly thinned out, which is as it should be, of course. It is the young who inherit the earth.

However, I am determined to retain my sense of humor through all this humbling and reordering of what I am and my current place in the continuum. If what I once was is now relegated to historical notes, fine then! I will not be a grump about it! But during all the rites of passage through each phase of letting go and moving on, echoes of deep longings linger in the shadows. My guitar ranks high on the list.

I truly marvel at all the old musicians, the ones even older than I, still performing in front of audiences, still banging away with endurance, agility and the skills fine-tuned by time. I was never a performer so I can’t speak to the drive that pushes one to that kind of exertion in order to feel alive, vital and relevant but I well understand the compulsion to make music.

My decision to end the four decade love affair with my guitar was because my beloved Conrad, the dear friend that gave me precious bits of time to regenerate and refill my well during the manic child rearing years, suddenly got bigger and heavier. It’s a mystery for sure.

For that reason and advancing arthritis in my hands, I gave up playing and eventually the poor old thing needed repair anyway and slept forlorn on a shelf in the basement under a blanket of dust. And then, one day, my son, in the dearest of loving gestures, sneaked it out and had it repaired to surprise me for a Mother’s Day. That reunion, that first time, after years of silence, when I formed a chord and heard that distinct ring of the strings, I was awash with emotions that threatened to drown me.

However, as wonderful as it was to have my guitar back, there was no way to deny that the years, having taken their toll, demanded that I stop trying to regenerate what once was so easy and now is not. With somber resolve, I decided to give it to my son who is now the keeper of the instrument and the forty years of memories it represents.

But, again, rebel that I am, I’ve never been a quitter. So, still haunted, by the need to make music, I tried to compromise my limited skills with a lap dulcimer and then an electronic guitar thingy that sounded more like a toy electronic autoharp.

Meh. Did not quite fill the need for strings and chords and picking. Or something.

>> Here’s where I’m going to insert that God does know what we need and He often, with amazing grace, provides it in the strangest of ways even when we didn’t think to pray for it.<<

One day, meandering through a local flea market, I stopped at a booth that featured small instruments. Hanging high up on the side I spotted a ukulele. Four strings. Small. Easy to hold. I took it down and strummed it lightly and I swear I heard an old familiar call to which I responded - and took it home.

Amazing the change in perspective a new learning curve can generate in an old mind and bent fingers.

I’m well aware my family gets a big kick out of me. I understand that stories told about me are the source of much laughter and I’m good with that. Further, I often do and say things to instigate amusement, having always maintained that I hope when I go I can leave ‘em laughin’.

But I also secretly relish that they don’t have to know everything there is to know about me, and actually can’t.  After all, they only know me based on our familial relationship from the moment of their beginning. Thus they don’t know the me who was long before they were. They don’t know the young woman who needed beyond reason to create music even if no one else listened or heard, who didn’t need or want cheering audiences, record deals or worldly acclaim.

...the girl who wanted to turn her poems into lyrics, to lose herself, for her reasons, in music that only she could appreciate.

When my daughter asked me why I started my diet again and walking every day, I knew the core answer would be too long and/or boring so I cut to the chase:

“It’s because of the ukulele,” I replied.

I’ve been told there was much raucous hooting and knee slapping over that one, which, I admit, makes me smile real big as well.