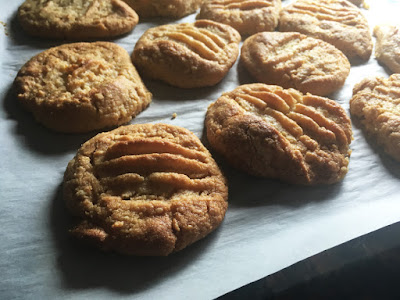 Long, long ago, in the crux of child rearing, stuck deep in learning the art of dodge ball (otherwise known as life) I happened upon a cookie recipe that, because of its simplicity, became a standard in my arsenal of quick, easy, whip-it-up-in-a-flash go-to’s. Four decades later, even with my own adaptation to low-carb, I still make these delectables at least once a week.

Having rallied to an old familiar craving this weekend, while stirring up a batch, it occurred to me that these soft, chewy, aroma-terrific, little cakes of pea-nutty delight, could represent something way more than a sweet treat.

The original recipe was called ‘Impossibles’ likely because with only three ingredients necessary and not even a pinch of flour, it seemed impossible that a cake like cookie could come from such a combination. One cup of sugar, one cup of peanut butter and one egg. That’s it. Blend those three ingredients into a smooth stiff dough, divide it into twelve equal parts, roll each piece into a ball, put them on a parchment paper lined baking sheet, press them with a fork and bake them at 350˚ for 11 minutes.

But wait - here’s the kicker - my sudden revelation while making my low-carb version was that as easy as the recipe itself is, the cutting into twelve equal parts has always been a bit of a challenge, bordering on a culinary art skill. Cut the dough in half and half again. Then, (here’s the tricky part), cut the quarters into thirds. Sounds easy but it does take some concentration and effort and the occasional robbing of one ball that’s a tad bit bigger to add to another and then re-rolling both pieces.

Imagine my amusement when I realized I’ve been overly devoted to this routine for way too long and therefore have missed a huge opportunity to embrace an upgraded change.

That’s the thing about habits, the by-product is myopia. We rarely look at those things we have become accustomed to, that we accept as static, unchangeable, without question, to be something that might could be tweaked and/or improved. In other words, for no other reason than unchecked inertia, we dig ourselves into ruts, sink and lose sight of those great big uncharted horizons that sit waiting for us to discover.

Cutting the dough ball into halves then halves again, I realized I could easily just cut the quarters in half, then the eights in half. Bam! Sixteen cookies instead of twelve. No fuss no fiddling. Did not take Common Core math on four sheets of paper to figure out either. Plus, there’s the added bonus of four extra cookies to a batch!

Some might call this analogy a stretch but I see it clearly because I know a few loved ones who are up against great big impossibles in their immediate futures and stepping out of the old way, the recipe as it has always been prepared, has jarred them from their comfort zone.

I’m just as susceptible as anyone to allowing long held thinking and habits to keep me from seeing a thing in a new way, but I am also always open for experiencing ah-ha moments that add fresh new perspective. Those break away realizations that encourage us to trust that, while things might seem staid and/or unchangeable in life, that demand troubles and struggles must overwhelm and rule, there are, indeed, other possibilities.

But not without accepting that there must be some kind of change. There's the rub.

(Matthew 19:26) - And looking at them Jesus said to them, "With people this is impossible, but with God all things are possible.”