To Speak or Not 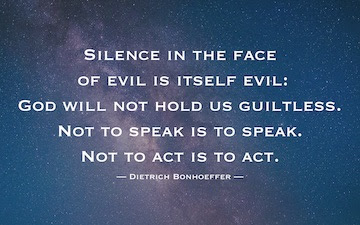 Using social media as a template, one might conclude that we have become a cause-based culture. Nothing wrong in supporting a cause, of course, unless, as does often happen, the cause morphs from a good-will intended interest to a religious force. Loyalty to a truth sometimes produces pride and even hypocrisy. As all sorts of causes arise, hyper-self-righteousness steps in and then becomes weaponized to compel others to rally to, at the very least agree with, the movement, often using intimidation and/or shaming to recruit converts. Once a cause becomes a cultural stream of consciousness if you prefer to not join in, or even openly oppose, prepare to be vilified. Then your choice is to either speak your mind and be damned or be silenced by the madding crowd.

Maverick that I am, I’ve never been much of a joiner. I am still able to think for myself rather than be moved about by feelings and/or fear of being seen as an outlier. Outlier is one of my middle names, actually. I depend on discernment earned by experience, spiritual maturity, fine-tuned intuition, and logic/reason to be better flotation devises for keeping my head above the surface of the murky waters of life. If I get even a whiff of being baited or manipulated by emotion or fear-based agenda, I instantly armor up. At that point I have but two choices - either speak up or shut up. If it is clear for me that I do not have the power to change or stop what I see as either cultural suicide or cultish religiosity, my first reaction is to go silent.

I have not determined whether this is cowardice or wisdom, though I suspect both conditions contribute to my decisions in equal measures. Though mostly I depend on prudence as my guideline, I know the day is coming when I may have to speak out about the false gods we build then worship, both worldly and religious, the way we crave attention and promotion for doing good deeds thus establishing a good-for-goodness-sake substitute for true Godly good, and the new heights and types of inordinate affection that have risen to overcome and replace the natural order.

But, just for now, I mostly choose silence, not to go along to get along, but to wait with patience, to pay attention, to learn and discern. But even silence doesn’t have to be unfruitful. It can then become prayer for deliverance from evil. No one, no man-made law, (whether religious or secular), no meme du jour, can stop me from doing that.