That Thing About Christmas 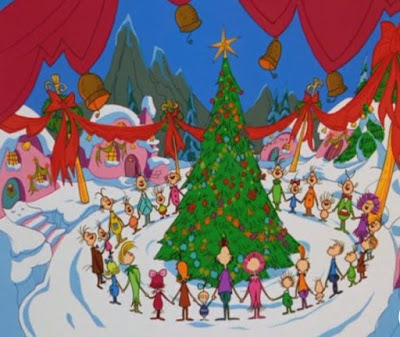 He asked me what Christmas was like when I was a kid. I had to pause and edit the plethora of possible answers into a brief summary.

After a moment I told my grandson that, first and foremost, I recalled that Christmas was much simpler in the fifties. No one even spoke of the coming season until after Thanksgiving. There were no decorations in the stores or on the streets until about mid-December. But of course that was before The Great Force of Commerce had taken the helm and steered the ship into a new direction.

We discussed ever morphing societal change and how things evolve and often at the center of great change is economic in nature.

Later, after our home schooling for the day was done, I sat and reflected on our discussion. So many Christmases in my history of 72 years. Almost recallable as though reading a book - each era of my life recounted as though in a separate chapter. Good years, not so good years, prosperous years, lean and sometimes frighteningly difficult years. I’ve seen them all. I’ve lived them all. Traditions begun and then softly abandoned over time to be replaced by others as children grew up and brought home new additions to the tribe.

As I reminisced, trying to recall all the best years, I discovered that my most vivid memories were of those when times were tough and I was forced to soldier on to make the holiday as good as possible for the ones I loved. Thus, all the best Christmases are swirled together into a single sparkling blur, like a galaxy far away. I’d be hard pressed to identify a specific year or moment that stood out. Conversely I can recite the details of all the times I had to simply make it work and smile as though nothing was wrong.

In summary, I told my grandson that Christmas comes anyway, no matter what is going on in your life. Just like the residents of Whoville, upon waking to the destruction the Grinch had committed, they gathered around in the town square and sang praises to the One they celebrated on that day.

That true thing about Christmas is that it can never be taken over by any commercialization. It stands alone, with no need for any human decorating or dressing up. It comes even if you are  sitting in a trench on a battlefield.

Christmas isn’t about traditions or customs. Christmas is about Christ. That He came, as a babe in the lowliest of circumstances. That He is our gift, our reason for standing in spite of the noticeable great growing opposition to the faith and reason for the season.

But regardless, just as you can pray anywhere, and no one can stop you, Christmas is something you can celebrate in your heart 24/7/365.

Merry Christmas! No matter what your circumstances this year, may your hearts be light and grateful.