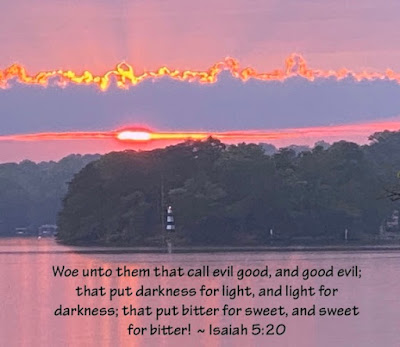 As the news cycle evolves from Covid Crisis to Civil Crisis, I watch the madness as society implodes and conclude we are indeed at war with dark principalities.

Never having been much of a joiner, I am unable to plug into the current stream of consciousness. I’m a maverick free thinker who always has questions but rarely gets them answered. So, I stand aside and observe as humans self-destruct, usually under the banner of righteousness - currently referred to as being “for the greater good”.

I’ve run out of ways to say this, so I’ll just put it here, perhaps one last time - no apologies - human righteousness is not God righteousness. We can rally to causes that seem so good to our human sensibilities. But when we depend on our own interpretation of goodness, those who are determined can force millions into a mindset of what they deem is best for mankind.

Unfortunately, history tells us that if it isn’t from God, we fall short every time … to our detriment.

We can also make thousands of laws but we will never be able to legislate safety, hate or love. Why? Because these conditions are subjective and cannot be defined or enforced by a written code. What is safety? What is hate? Isn’t murder unsafe? Isn’t all crime hate driven? Is one murder more heinous than another murder if it falls within the boundaries of an additional written law? If existing laws cannot insure safety or prevent murder, can more laws stop hate? What is the goal? To create love by outlawing hate?

Those in charge of Communist China, being godless, have implemented a ‘good citizen’ point system because 'goodness' must come from somewhere. Is that where we are headed?

The following questions spawn many more that point me to a single conclusion:

• Release dangerous, violent criminals from jail (lockdown) because they might get Covid-19 but then arrest small business owners for defying lockdown and throw them in jail?  But, take the blue pill because we are all in this together, right?

• Shelter dozens of Florida wild fire victims in a hotel that had been closed due to pandemic rules and tell those who wish to donate items they must drop off at front door of hotel to protect the people suddenly forced to shelter there - together?

• Ignore a US Naval ship docked at New York harbor ready to receive Covid-19 patients but instead send them to nursing homes to infect those who had been declared the most vulnerable people.

• Find shelter for California homeless in hotels that closed due to pandemic. Provide them with alcohol and hard drugs and when the coast is called all clear - then what?  Throw them back to the streets? Will the media notice?

• Spend millions of taxpayer dollars to erect temporary hospital tent camps in multiple cities only to have to take them down for lack of use.

• Scramble to provide shelter for 10,000 victims of two dams breaking in a state that is run by a Governor who demands the citizens remain in lock down and that churches remain closed, that a barber be ripped of his license even as a filthy sex club be deemed ‘essential’?

• Open beaches in one state even as another threatens to pull any swimmer out of the ocean and arrest them?

• A lone surfer in Manhattan Beach, California, was cited for defying state orders that all beaches were closed, for a fine of up to $1,000. Apparently the ocean isn’t big enough for social distancing?

• What does asymptomatic mean and does this only apply to Covid-19 and not other viruses? Do we have herd immunity from past pandemic viruses? How did that happen? Can they test for that?

• What happened when the Great Black Plague of the 14th century that killed 50 million people finally ran its course?  How did we survive the Spanish Flu pandemic of 1900? How many died of Hong Kong flu of 1968, including those who attended Woodstock? What happened to Sars? Bird Flu? H1N1? How many will continue to die of all sorts of causes, including different viruses, cancer, accidents, physician error? Can we end death by staying quarantined forever?

• Where are the other statistics for deaths in the first five months of 2020 from causes not Covid-19? Can we even believe the statistics given how loose the counters were with cause of death?

• Demand mail in votes because it’s safer but allow big box stores to stay open even as small businesses are ordered to stay closed?

• If being sufficiently dumbed down produces a mindless unwise society of un-thinkers, how long til we dissolve into anarchy?

• Are we living in the Matrix or is it the Truman Show?

There is only one answer that satisfies all the questions for me - satan must be thrilled now that a tsunami of common senselessness has washed over us.

Even so come Lord Jesus