(Acts 27:14-22) But after no long time there beat down from it a tempestuous wind, which is called Euraquilo:  (15) and when the ship was caught, and could not face the wind, we gave way [to it,] and were driven.  (16) And running under the lee of a small island called Cauda, we were able, with difficulty, to secure the boat:  (17) and when they had hoisted it up, they used helps, under-girding the ship; and, fearing lest they should be cast upon the Syrtis, they lowered the gear, and so were driven.  (18) And as we labored exceedingly with the storm, the next day they began to throw the [the freight] overboard;  (19) and the third day they cast out with their own hands the tackling of the ship.  (20) And when neither sun nor stars shone upon [us] for many days, and no small tempest lay on [us,] all hope that we should be saved was now taken away.  (21) And when they had been long without food, then Paul stood forth in the midst of them, and said, Sirs, ye should have hearkened unto me, and not have set sail from Crete, and have gotten this injury and loss.  (22) And now I exhort you to be of good cheer; for there shall be no loss of life among you, but [only] of the ship.

lifeline |ˈlīfˌlīn|
noun
1 a thing on which someone or something depends or which provides a means of escape from a difficult situation: faith is a lifeline for the hopeless.

No matter how many times I read Holy Scripture, I am often stunned to see a new perspective in the Word. This is singularly attributable to maturing in the spirit and my ever continuing readiness to see a Biblical lesson. It’s rarely like a bolt of lightening, and never a revelation that could be labeled as ‘new interpretation’, but rather just a grown up understanding of what has always been there to be seen. Truly the Bible is a living Word. 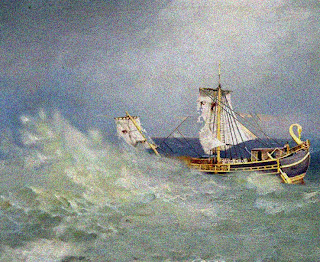 Recently, reading in Acts, the last chapters, once again I found Paul a prisoner on a ship bound for an interview with Caesar. The Jews wanted him eliminated. He was making too many waves in the religious community, drawing away too many faithful to become followers of The Way. They didn’t like it, so they asked the Romans to do their dirty work for them, find him guilty and execute him.

In ancient Asia, things didn’t move as quickly as they do now. Paul spent several years as a prisoner, awaiting fair trial. As a natural born Roman citizen, he was entitled to be heard. Though the Jews made up a case against him, the local authorities, having interviewed him, couldn’t find a thing worth executing him for. They kept passing the buck until eventually he was sent off for a face to face with the big guy.

This took time too because he had to be transported on a ship, airplanes and other modern transportation not yet having been invented. Winter was coming and Paul warned them they should port until after the threat of storms had passed. They didn’t listen, of course. Sure enough, they found themselves in a tempest for weeks. They couldn’t eat, they couldn’t sleep. They had to toss over goods to lighten the load. They believed they were going to die. Paul assured them that he was destined to be interviewed by Caesar and they also would be spared by God’s mercy. And that is exactly what happened, even though the ship was destroyed.

All these years, reading this story, imagining the little Roman vessel tossed about, the crew desperately hanging on, soaked to the skin, seasick and without hope, I never noticed one little thing, until this last read through.

Paul suffered right along with the rest. He was tossed and soaked and sick and hungry and sleep deprived. He went through exactly what the crew did. But he had one thing they did not. He had faith and foreknowledge that he would be spared.

How significant a thing is faith? How do we ignore the lifeline that keeps us looking up and out, keeps us holding on? How can we trust a manmade doctrine that lulls us into believing we don’t really have to have faith like Paul in the Tempest if we just believe that we won’t have to go through the Tempest?

Well, I hate to be the bearer of bad news, just like Paul warning the crew who would not listen, the Tempest is upon us, dearhearts. The waves of judgment are about to engulf us. We cannot prepare for this physically, only spiritually. It’s time to grow up and realize that God often spares us but only after we survive the storm. It’s the faith that we will  survive, no matter what, that is our lifeline.

God is waiting to show Himself strong in behalf of those whose heart is perfect toward Him. He invites us to prove Him. He longs to demonstrate what He can do, exceeding abundantly above all we ask or think, great and mighty things which we know not.

“Let us therefore come boldly unto the throne of grace, that we may obtain mercy and find grace to help in time of need.”

This is our Father’s world. God is still on the throne of creation. Call on Him and He will answer.  ~ Vance Havner