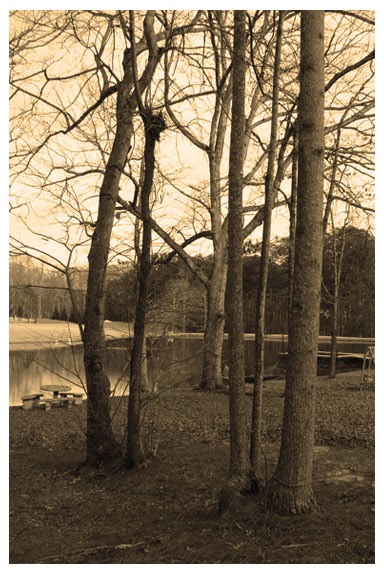 It’s Sunday, the last week of February 2014. We have a respite in the winter weather. Last week we were recovering from snow and ice. Today the boys are out shirtless digging, running, swinging and soaking up some natural vitamin D. This is fairly normal here in the south where we can expect small waves of real winter in between breaks that mostly serve to confuse the plants. It only takes a few days of this and the trees will be budding out and the crocus will pop up to see what’s going on.  Regardless, it's still a little early to be proclaiming spring.  We’ve had snow storms as late as mid-march, although that is somewhat unique. Nevertheless, the tree frogs aren’t waiting. They’ve been practicing frog chorus since before the snow was fully melted. Apparently they have their own internal clocks that have nothing to do with the weather. Much the same as the geese. They have begun to pair off. Soon, there will be a nest on the island.

I was sitting here on the deck, inhaling the panorama of this preview of the changing of the season. Bird songs dance in the still gentle air. Geese honk, dogs bark, boys whoop and holler. Suddenly I had the strangest thought. I had a small achey spot that wished this moment could somehow magically stay for longer than 24 hours. It was so not like me. I’m fairly good with things moving along as they should. Every day is sufficient unto itself.

But this came from someplace deep. I recalled a poem I wrote when I was nineteen, pretty close to fifty years ago. I dug around in my library for the little volume of secretly composed poetry and prose I titled, Shadows Speaking, that I have managed to keep all these years.

These brown February woods in which I walk,
are asleep.
Of what do they dream?

Perhaps of spring,
And green,
And blue.
Of warmth
And summer noises?

How foolish you say, that woods could dream.
It was only a thought.
I know that trees and soil and rocks have
no human capacities.

But these inanimate objects can comfort me
Sometimes unlike any human.

There it was. Comfort. It is what we all want, even more than wealth. I was so young when I wrote that but even then I knew I needed something. Everything was still all ahead of me. The good, the bad, the fun, the tragic. Every thing great and small had a reason to be.  I made mistakes, took wrong turns, and yet, The Comforter was always there waiting for me to reach the end of myself so that He could be the sum of all I needed.

“The reason why many are still troubled, still seeking, still making little forward progress is because they haven’t yet come to the end of themselves. We’re still trying to give orders, and interfering with God’s work within us.” ~A.W. Tozer