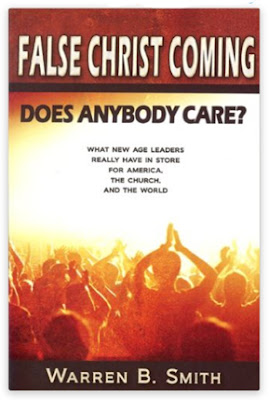 Yesterday I read False Christ Coming: Does Anybody Care?: What New Age Leaders Really Have in Store for America, the Church, and the World by Warren B Smith. It was eye-opening and frightening. While I already know the long term agenda of the new age movement, I didn’t realize how deep and wide it has gone while we were busy doing other things. Those who would bring about complete slavery to a new world order in the name of peace are literally close to full implementation of the Grand Plan for humanity.

Here’s a clue: It has nothing to do with God’s plan.

I can’t claim to be shocked but I can say I’m feeling enormous frustration today. I’ve always understood that being one of God’s Remnant meant being an outcast not a star - separated. I’ve always excepted that when you grow in the spirit and come to realize more truth, the fewer, not more, people there will be to talk to. To step out, to give your life to Christ, generally always means finding yourself at odds with the world view.

...because... there are more who don’t get it and don’t want to get it, than who do. If that isn’t frightening enough let’s say it another way. Those who do understand are so outnumbered majority rule has the upper hand, determines the definitions, the interpretations, and dominates the narrative. That’s the disheartening part.

Pardon me while I pause to wipe the cold sweat from my brow.

In False Christ Coming - Does Anybody Care? Smith’s frustration shows up and I understand that so well. I’ve been warning about the clever ‘good’ masks that evil wears for quite some time. I know that I am mostly talking to myself here though. I’ve referred to it as being not unlike screaming in a vacuum.

Smith holds nothing back. He names names and calls out the false doctrine and outlines with quotes what the real plan for humanity is. Having been immersed in the toxic new age Course on Miracles in his young adult years, Smith knows what the real face of evil looks and sounds like behind the mask. There is no better witness than one who has lived it.

The question is, who cares? Who is willing to read the book and see for his/herself? Who cares that a world wide movement to reorder human life as we know it is already in place, is fully organized and named and it’s not a conspiracy theory?  That big names and big money are fully behind it? That the modern church is adapting as quickly as it can to the concept of the “New Church” - which has nothing to do with Christ?

Perhaps you are counting on being Raptured out and so you don’t need to know these things. Tell me again who are the foolish virgins? Those who were not prepared when the Bridegroom came at midnight?

(Matthew 24:3-5) And as he sat on the mount of Olives, the disciples came unto him privately, saying, Tell us, when shall these things be? and what [shall be] the sign of thy coming, and of the end of the world?  (4) And Jesus answered and said unto them, Take heed that no man lead you astray.  (5) For many shall come in my name, saying, I am the Christ; and shall lead many astray.
Posted by meema at Tuesday, January 26, 2016