I’ve said numerous times that I pay attention to coincidence because I’ve been around long enough to recognize that as one way God speaks to me. 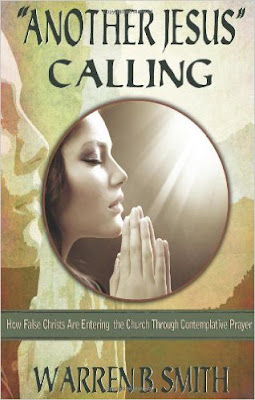 Several years ago I read a comment in a Christian forum asking if anyone had read a book titled God Calling. I’d never heard of it so I looked it up. Amazing Amazon! I took advantage of the Look Inside feature and picked a page. The book is a devotional written by two sisters in the 1930s. The premise is that these women ‘channeled’ God who told them what to write. I’m not going to waste time here doing a review.

The one page I read was more than enough to see that it throbbed with New Age. I took it on myself to post a comment in the forum suggesting that discernment might be in order to determine whether to read and trust the book as genuinely coming from God. It was telling for me that there was little agreement with my assessment/warning. It breaks my heart to know how sheeplike Christians are.

It came to my attention that another book, Jesus Calling, a million copy seller, has flooded the Christian book marketplace. Originally the author claimed that the book was inspired by God Calling. But when the alarm was sounded by numerous New Age watchmen, like Warren Smith, the publisher removed references to God Calling in the reprints. Confronted with the duplicity, the publisher’s publicist made lame excuses and the book remains a best seller. Again...it breaks my heart that discernment is all but gone and God’s people languish for the lack of it.

This world is smothered in soft lies, those good sounding ideas and uplifting emotion driven words that appeal to our human passion. But did you know that passion is the least reliable way to assess information? We love to feel passion, it stirs us and arouses us, calls us to action and leads us to mountain top experiences. But passion cannot be sustained. Once the adrenaline subsides, if there is no substance, what we thought was real, turns out to be only the sticky residue of an impassioned moment.

New Age theology/ideology is full of soft lies that appeal to our passionate humanity. It rouses our innate desire to redefine ourselves as something else, better, wiser, more in tune, mystical, charismatic, fine-tuned, all senses engaged and fully functioning.

New Age and all its incarnations, while offering amazing new vision, often employing words that ring of Christianity, leave out the most important part - the Real Jesus. New Age always puts the focus on the individual improvement of mind/body and when that tactic doesn’t work, New Age tries something a bit more diabolical. It pretends to put God and/or Jesus in the center even as it diverts gently, ever so subtly, to the bottomless tar pit waiting underneath.

Sheer hard knock experience has taught me that my life is not my own. I’m just a vessel. I don’t always do the exact right thing, I am human after all, but for the most part I am on auto-pilot so that Christ has the wheel. Ever open to the still small voice. Ever willing to pay attention to the small dots that can be connected to reveal a truth. Truth is what really matters, after all. Truth is not just real it is consistent and dependable. It has longevity, it’s timeless and foundational. I’d rather know a tough truth than be blindsided by a soft lie any day.

Dabbling in New Age, enjoying the passion while claiming to be impervious to the snares is a dangerous game. How about this for a hard truth - there comes a time when those who refuse to see will be blinded lest they see. It’s happened before.

(John 12:36) While ye have the light, believe on the light, that ye may become sons of light. These things spake Jesus, and he departed and hid himself from them.  (12:37) But though he had done so many signs before them, yet they believed not on him:  (12:38) that the word of Isaiah the prophet might be fulfilled, which he spake, Lord, who hath believed our report? And to whom hath the arm of the Lord been revealed?      (12:39) For this cause they could not believe, for that Isaiah said again,  (12:40) He hath blinded their eyes, and he hardened their heart; Lest they should see with their eyes, and perceive with their heart, And should turn, And I should heal them.
Posted by meema at Saturday, January 23, 2016