High on a shelf in the darkest corner of the basement, an obsolete audio playing device rests beneath a light blanket of dust. It exists, instead of being dismantled or buried in a landfill, because there is another box on another shelf in the same basement that holds an assortment of 8-track tapes, most of which are collections from forgotten music artists but a couple are homemade recordings.

One, in particular, is the keeper of my father’s voice. 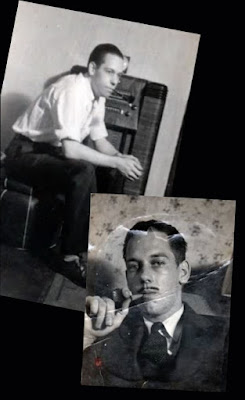 My dad delighted in making tapes with his recorder. One day he decided to introduce his five year old granddaughter and two year old grandson to the joys of hearing their own voices. He interviewed them and coaxed each to perform songs of their choice. They tried out knock knock jokes on each other as the magnetic tape captured the silliness and giggles. He reenacted a joke from his favorite TV show - ‘Doc, it hurts when I do that! Well then don’t do that!’ Heeeee Haw!

Sometimes I think about that tape. I wonder if I were to make the effort to clean the player, hook it to speakers and electricity - would it work? Would I be able to hear again my dad’s voice?  Or would it be too damaged by the ravages of time? The not knowing keeps the dust undisturbed on the 8-track player. If it didn’t work, I think the disappointment would be too high a price.
And so I choose to simply remember. My brain, at least the long term memory part, recalls that moment even better than a strip of plastic. I can still hear his voice quite clearly in my head.

When I can’t hear him I can see him, in my mind’s eye, doing right. I can remember he was honest, hard-working and honorable. He provided for his family, he took pride in his home. I’m sure life wasn’t always easy and sometimes a challenge but I never heard him complain. He taught me more by simply doing it, not saying it.

I didn't realize, until I took this memory trip, that, in ways difficult to explain, it has been my father’s voice that has always held me accountable. All these years. Locked on the continuous playing synapse in my brain is the reverberation of a standard, a non-expiring, never vintage, holds-true-always, fundamental truth. Everything that is determinedly decent begins with the voice of reason and obedience to a higher authority.

When you respect and admire your Father you hope to hear, “Well done, good and faithful...”