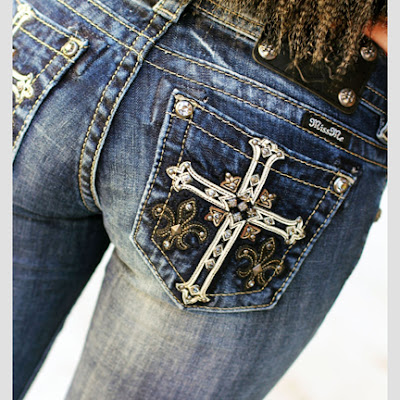 A strange thing has come to my attention. Modern mega churches are opting out of displaying the Cross, the most universally accepted symbol of Christianity, in their sanctuary or on their grounds, even as it has increased in popularity as a fashion statement.

I noticed this one day as I was out and about. While paused at a red light I spotted a glass building on the opposite corner. At first I assumed it was a business, a large business, but I couldn’t read the sign in front. What I could see I imagined to be the entrance, only I couldn’t see the front door just the towering three story glass and steel atrium above it. That peaked my curiosity so I made a point to find out what the business was. Hospital? Shopping/office complex?

As I drove past I discovered that it was a Baptist Church. All I could think was how odd and remarked to myself ( I do that - talk to myself because I am the only one who gets me) that I remember when one could always know a church by its Cross no matter if it was an old business converted to a church. Not so much now apparently. I admit I don’t understand this obvious omission. Oh the questions. Are they ashamed of it? Are they preparing for being a church in disguise when being a church is against the law? Are they afraid it might offend potential convertees?

A few minutes later I was in a store looking to find the things on my list when I spotted a young woman in front of me. Her back to me I could see, in all its glory, a bejeweled sparkling representation of a cross on the back pocket of her jeans, so tight they appeared to have been painted on. The question popped up in my head, was it supposed to be a Christian Cross or did the designer just decide to use two crossed lines on which to configure an assortment of glittering rhinestones on the pocket that sits over a gluteus maximus and it accidentally resembled a Christian Cross?

And then I wondered further...do we even remember what the Cross stands for anymore? If a church won’t display it and yet we see different forms of it in art, jewelry, on books, in logos, as though the symbolism declares the person wearing or using is a Christian, do we assume only a Christian would choose to adorn themselves with the ultimate emblem of suffering and shame?

Some Christians feel that bedecking themselves in the symbol is a badge of courage and I have no problem with that. It is indeed becoming less and less acceptable to openly be a Christian nowadays. I have to say though that it appears the ideology of the Cross has become so saturated with modernity that respect for it has been effectively diluted and minimized to the point of irrelevant. Almost as though, by overusing and misusing it, desensitizes us and renders it powerless. In which case, anyone can use the cross as an ornament - even a satanic hard metal rock band.

Isn’t that a sign? Satan questing and working overtime?

Regardless, I can’t get over the irony of the institutions who ought to know the true value of the Cross and its full meaning, who consciously choose to leave its symbolism out of their places of worship even as the fashion world turns it into body art.

One could build a ship with so much irony.


And exchange it someday for a crown.
Posted by meema at Monday, August 22, 2016