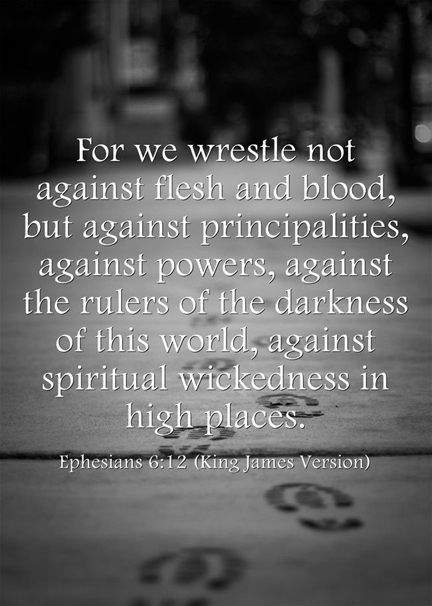 Rather than making new year resolutions, that I know I’ll abandon before January is done, I prefer to do an annual introspective review - just a personal eval to determine what can be improved on and what needs to go. This sort of internal audit is a waste of time without applying brutal honesty but if done properly can promote genuine growth.

Depending on life circumstances, some years I can report progress and some years there is simply status quo. I try not to go backwards regardless. I’ve come to understand and accept that it’s a process - being human is something of a handicap although should never be an excuse. It is what it is.

One ongoing condition that often stalls out growth is the constant tug of war we have with the unseen forces that desire to destroy us, or, at least, keep us separated from God.

Now, to be clear, speaking of demons, evil spirits and dark principalities can be a slippery slope that more often than not can lead to misunderstanding. We are admonished not to dabble in or give attention to spiritualism and soothsaying but that does not mean that the ‘other world’ does not exist. The object is to recognize it for what it is so as to be aware. This is known as discernment. The devil is real and has minions who work overtime questing to undo us. The Scriptures confirm this.

I love the old saying, ‘if we stand in the light of Christ satan cannot see us’ so I make an effort to stay invisible in the Light as much as possible.

However, in recent years, due to a major learning curve I’ve been thrust into, I have come to understand that being a truth-seeker is like having a target on your chest. Doesn’t matter where you stand. The demons or spirits, whose names are Legion, are first and foremost liars who cannot abide in truth. Truth burns them and so their whole purpose and reason for being is to promote lies to counter and cover up truth. They will seek out to oppose and nullify anyone who stands for truth.  To say they do not like being outed is an understatement.

This year, in my self review, I’ve had to accept, graciously or not, that I am designed for calling out liars and exposing untruth. It’s certainly not a pretty job. I don’t get to speak softly and compose gentle encouraging words that make people feel comfortable. No, I have to say things that blast people out of their comfort zones. The point being - get it or don't! Michael Boldea refers to this as being a Battle Ready Believer.

I confess, I don’t like being the bad guy, the one who has to say the hard stuff that no one wants to hear. The one who has to call out and expose the underlying dark principalities and forces that seek to lead us astray and bind us up with good sounding delusion. Because I step up to the call to be tough, I make Legion roar with rage and so it’s no wonder that Legion hates me or that those who host or are in bondage to this lying demon hate me.

At the end of my personal evaluation this new year, I concluded that I’d rather be hated by demons than loved by the world. What I will toss out this year is fear of offending. What I will seek to improve on is patience.