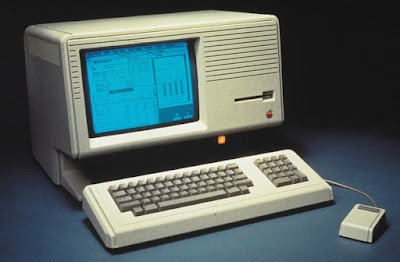 While I admit to loving serendipity, I do not have the same affection for being blind-sided. Therefore, I have developed the life-long habit of looking up and out, ever vigilant and attentive to the random details that have potential to come together as a force beyond my control.

But real life is often full of surprises and therefore it’s a given that one simply cannot be prepared for every contingency. All that is to preface a story I am compelled to share.

Hubs and I recently completed our binge watch of a four season Tee Vee show re-aired on Netflicks - Halt and Catch Fire. A period piece carved out of a ten year period from 1983 to 1993 when personal computers went from ‘what is the point?’ to the life-altering emergence of the World Wide Web.

Both timeframe and storyline were totally relatable to us because we were so there. Full disclosure, Hubs was there first, always the visionary, he pulled me in not exactly kicking and screaming, but not entirely both feet in either. He bought his first Mac in 1984 and my first Mac, a redesigned Lisa, 128k, in 1988.

We are nothing if not cutting edge.

The point of this ramble is not a review of the show, but an airing of what happened to me as my husband and I were re-immersed into that particular decade of our life story.

I was blind-sided. Days later, I’m still sorting my way out of it.

First of all, allow me to grumble that resorting to the label ‘period piece’ conjures up a reference to antiquity, the early American pioneers taming the wild west or the French Revolution. It’s something of a bitter pill to realize one is now old enough to be able to apply the term to one’s own personal middle-aged adult experience.

Secondly, the essence of the show - not merely the unfolding of how digital technology, first played with like Legos in the hands of young, impetuous, dreamer/ visionaries - exposed the essence of how I have always had to do things. Seat of my pants, dive in to the middle and work my way out to both ends, now known in modern vernacular as fake it to make it. Until the last three episodes of season four, I could not decide whether I was being forced to relive my enormous failings or celebrate that I tried at all.

And there’s the crux of it - hindsight is indeed 20/20 but it’s also an opportunity to review all the good and bad, the many starts and restarts, the energy expended, the investment in spite of all the unknowns looming that ultimately resolved themselves in success or failure, either of which turns out to be much less significant than we are supposed to believe.

We live in the moment in a constant state of ‘what ifs’ and that’s because, in the moment, we can’t trust ourselves to pick our options rightly. Only in hindsight can we see that we did choose wrongly sometimes but here we are - in the now, and it’s okay.

There’s an old saying - Everything turns out in the end. If it hasn’t turned out yet, it’s not the end.

Whew. I can move on now.