Save The Bees, or something 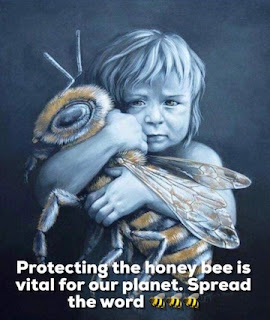 Hard to believe but in spite of all the years I avoided being sucked into the Facebook vortex, I have been a sorta-kinda Facebook stooge for more than two years now. Admittedly I still struggle with the finer mechanics and often do not fully understand how it all works, or is supposed to. Like? Love? Comment? Don’t comment? Are relationships/friendships dependent on whether you respond or don’t?

One thing I do understand very well, though, because I am nothing if not discerning, I see that Facebook is like a traveling carnival. Bedecked with artificial sparkle and dazzle even as it is fraught with deceitful and cunning carnies. Lots of fraud going on in the Facebook world. Well done ads by scam artists are more common than real ads. It’s a jungle in there.

The worst of the lot, though, are those that prey on current memes or the natural human compulsion to want to rally to a good cause. Unfortunately, these are those who are the easiest marks.

In this high speed, high tech, digital world, we are now so easily manipulated with good sounding words that are fortified with slick graphics. We have lost the ability to ask the simplest questions. Who? What? Where? Why? Show me the proof first. How much of my donation actually goes to the cause? Who runs the ‘cause’? How does my purchase do ANYTHING to help the cause? Why do you claim you’ve been selling this product for a year when your website was only launched a month ago?

Easy questions really. But instead of asking these, we jump in, we buy, we donate, we share the links so others can climb on board.

But because I am fine-tuned to see underneath the glitter, I can’t help but ask questions first, even at the risk of being judged a curmudgeon.

Classic example - there’s a new rally call, at least in the things that pop up in my Facebook whatchamacallit. It’s all about ‘SAVING THE BEES’. New products are being offered, jewelry shaped like little bees, stickers to proclaim your concern, car tags, etc. And, of course, replete with promises that portions of the sale of these charming items go to ‘save the bees’.

Ah but, call me crazy, I’d like to know what that means, exactly. How do we save the bees? Frankly, I’ve been following the world-wide decline in bee population for a decade. I’ve read in depth reports on this growing problem. The big question is: how do we begin to save the bees if we won’t admit what’s really killing them? I have my opinion, based on my research, and, if true, no amount of donations, or products manufactured and sold, no organized efforts on a Facebook post will fix this problem - the problem is real, even as the solution is real. But unless and until the hard questions are asked and addressed, I fear never the twain shall meet.

And so it goes in Carnie World. We easily see the glamour but not the ugly truth backstage.

Awhile back I read an eye-opening article in Scientific American about who/what launched the ‘Don’t Be a Literbug” campaign in the early 80s. Wanna guess? If you think it was concerned citizens/municipalities you would be wrong. A cartel of manufacturers of products packaged in plastic (think CocaCola) decided it was time to shift the growing problem of throwaway trash from those who make the throwaways to those who use them. In other words, by creating the meme (stream of consciousness) of being responsible for putting disposable trash where it belongs, in a trash bin, ultimately the onus of responsibility for the rise in world trash was on the consumer, not the manufacturer.

Clever, hun?  Carnies are, after all, good at mental games.

So, curious/skeptical me, here I am pondering questions, like, how can we save the bees with campaigns on social media if we aren’t willing to call out who/what is the real cause for their decline? You see, at the bottom of it all is about money. If we truly wanted to stop the growing trash crisis or save our bees, we would have to change some very large industries that contribute billions to the economy.

Since that’s not likely to happen, instead, we rally on Facebook and buy stuff and make donations to vaguely named organizations and then feel all good about ourselves for having done our part.