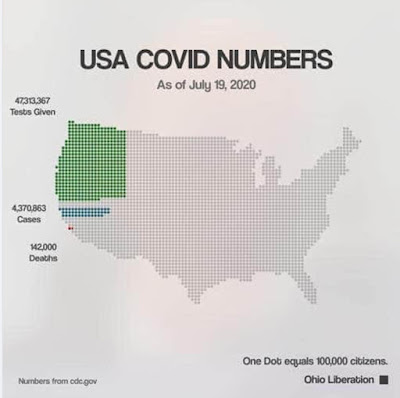 Continuing on with being unsilenced,

My husband and I survived a mild case of Covid the first two weeks of July. We did not show the normal signs but 11 days in, he went to his doctor who took blood. A week later his test showed that he had the antibodies but even the doctor could not say whether this constituted immunity or not. No one really knows what is going on or how to deal with it because there is so much conflicting statistics and opinions.

Being a history buff, I prefer to look at previous similar conditions and outcomes to balance out my opinions and personal choices.

Picking one example of the Swine Flu (H1N1) that was first detected in the US in spring of 2009 - according to the CDC:

I have to point out that 60+ million is a pretty big number and yet I do not recall any overt hysteria, no mask wearing mandates, no closing down of the economy. But then this was under Obama’s watch so there was no political reason to destroy the world.

The following is contributed by anonymous and I think it brings some common sense and perspective to this topic.

One of my friends has told me that she thinks I’m not taking COVID seriously enough, and as such, she felt the need to “hide” my posts. She didn’t appreciate that we went on vacation or that we visited my family. That’s okay. And since we live in America, she is entitled to her opinion.

While we do choose to take many precautions, like C.S. Lewis states below, “it need not dominate our minds.”  And it’s my goal for COVID to indeed, NOT dominate my mind.

In other words, do not let us begin by exaggerating the novelty of our situation. Believe me, dear sir or madam, you and all whom you love were already sentenced to death before the atomic bomb was invented: and quite a high percentage of us were going to die in unpleasant ways. We had, indeed, one very great advantage over our ancestors—anesthetics; but we have that still. It is perfectly ridiculous to go about whimpering and drawing long faces because the scientists have added one more chance of painful and premature death to a world which already bristled with such chances and in which death itself was not a chance at all, but a certainty.

This is the first point to be made: and the first action to be taken is to pull ourselves together. If we are all going to be destroyed by an atomic bomb, let that bomb, when it comes, find us doing sensible and human things—praying, working, teaching, reading, listening to music, bathing the children, playing tennis, chatting to our friends over a pint and a game of darts—not huddled together like frightened sheep and thinking about bombs. They may break our bodies (a microbe can do that) but they need not dominate our minds.”

— “On Living in an Atomic Age” (1948) in Present Concerns: Journalistic Essays