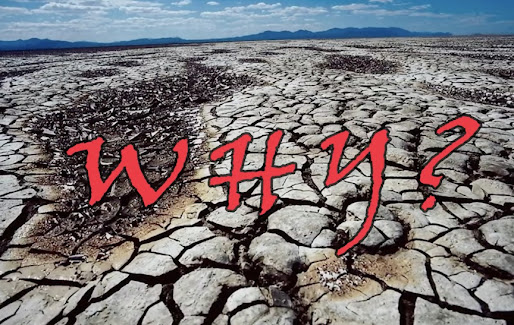 A big Thank You to Nann for contributing this blog post. :-)

The following is an excerpt from Strange Kingdom by Ken Costa that caused me to ponder this and what I thought about it. As usual, my ‘take’ on this does not harmonize with the popular explanation.

That single word reverberates through every human population in every age, through every nation, tribe, and family that has ever existed, through the experience of every single person on the planet who has ever lived.

At some point in our lives we will find ourselves asking, “Why?” Or, more likely, shouting, screaming, or crying, “Why?”

Why does a disease devastate whole populations? Why does a ferry go down with the men, women, and children on board lost? Why does an airplane disappear, leaving behind distraught relatives without even a shred of comfort from knowing what happened to their loved ones? Why earthquakes? Why tsunamis? Why the subtle mutations in otherwise good cells that lead to cancer?

Why sorrow, illness, violence, bereavement? Why are my prayers not answered?

Yet, in Jesus’ cries from the depths of suffering and violence on the Cross — the deepest grief ever known — He carried our why with Him.

We are not alone. He understands us, He’s been there, and He assures us that He has a plan to wipe away every tear, to make “everything sad... come untrue,” as J. R. R. Tolkien put it at the end of The Lord of the Rings. No one likes tough times, but those tests add power to our testimony.

If God didn’t withhold from us His very own Son, will God withhold anything we need?

Suffering is unbearable unless you know God is for you and God is with you. Because if we think amid our pain and suffering that we are forsaken, we could fall into three possible traps: isolation, self-absorption, and condemnation. “My God, my God, why have You forsaken me?” is one of the most remarkable questions in the history of humanity.   In fact, this is the only time in the Gospels when Jesus prays to God and doesn't use the word Father. Whenever we pray, cry, or scream, “Why?” we are, intentionally or otherwise, placing ourselves alongside Jesus in a kind of communion with the One who asked that same question of His Father.   “Why?   Why have You forsaken Me, Your very own Son?” We might feel so totally abandoned, so thoroughly rejected, so fundamentally lost that all we can do is cry, “Why?”

Yes, the suffering that Jesus endured is unfathomable to me.   Never will I deny that.   But I see it like this . . . God had a plan.  Jesus knew that plan before He left the Father’s presence and was in agreement with the plan.  Jesus knew His Father would never leave Him nor forsake Him.

Jesus, Himself, told the parable of the wicked managers beating those sent previously and that they would murder the Son, the heir.  Nothing the evil ones plan and plot is a secret from Almighty God.   Father knew they would murder His Son.  So they planned to use that death to bring life to creation!   How marvelous is that?  Outsmarting them at their own game!

Jesus knows when we are at the end of our rope - due to an accident, a death, a devastating event - we believe God is not there for us.   So He stated that on the cross . . . ‘I am at the end of my rope - GOD WHERE ARE YOU?’   The darkness around was the heavens telling the story.   Mankind was in gross darkness.   It was separating us from Father.

Then came the morning.  The darkness vanished.   Then the grave was empty. Father’s plan had been carried out perfectly!!

We often don’t see the end of the plan when we are suffering through it. In retrospect, if we abide in Christ, we can not only see but marvel at the outcome.  Our part is to obey and submit to the plan - no matter how dark it gets or how much suffering is involved.

33 “Hear another parable. There was a master of a house who planted a vineyard and put a fence around it and dug a winepress in it and built a tower and leased it to tenants, and went into another country. 34 When the season for fruit drew near, he sent his servants to the tenants to get his fruit. 35 And the tenants took his servants and beat one, killed another, and stoned another. 36 Again he sent other servants, more than the first. And they did the same to them. 37 Finally he sent his son to them, saying, ‘They will respect my son.’ 38 But when the tenants saw the son, they said to themselves, ‘This is the heir. Come, let us kill him and have his inheritance.’ 39 And they took him and threw him out of the vineyard and killed him. 40 When therefore the owner of the vineyard comes, what will he do to those tenants?” 41 They said to him, “He will put those wretches to a miserable death and let out the vineyard to other tenants who will give him the fruits in their seasons.”