(Mark 2:21-22) No one sews a patch of unshrunk cloth on an old garment. If they do, the new piece will pull away from the old, making the tear worse. 22 And people do not pour new wine into old wineskins. If they do, the wine will burst the skins, and both the wine and the wineskins will be ruined. No, they pour new wine into new wineskins.
When my oldest grandson turned sixteen, I helped him locate and purchase his first car–a 1992 Amigo. I’m trying to think of a word that would best describe it. Rough is pretty close. We’ll go with that for now, I’m sure something else will come to mind.
Regardless the shape it was in, he loved it. To say it was was well broken in is being kind. It had a nice assortment of dents, an interior that had all but forgotten better days. It had a rag top that was more or less rotten, on the immediate need triage list was tires, and a host of small things. Over time, we replaced nearly everything vital, one part at a time. Battery, top, back seat, which we found in a junk yard, lights, hoses, transmission, brakes, alternator. It was a full time ongoing project just to keep it running. I created a personal relationship with an online auto parts warehouse that stocked hard to find parts. We could have done better by getting something newer and paying a monthly payment. Hindsight.

But the Amigo was his first car so he had a fondness for the rattle-trap that was hard to explain and we managed to keep it going for a couple years until he went off to college, four hours away. Many prayers went up when he headed off down the driveway. It made the trek to and from college a couple times and then, one Sunday as he was heading back to school, he called me, an hour away from getting there. Something happened. It lurched and clunked and rolled to a stop. He managed to coast off the highway and into a gas station. I told him I’d call him right back. I got on my knees, “please dear Lord, start that piece of junk and get him back to school.” 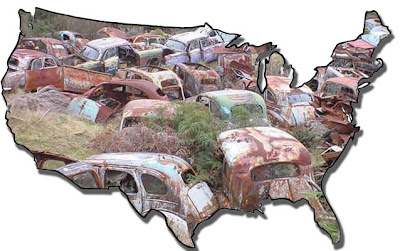 I called him and he said he turned the key and it started up. He made it to the dorm parking lot. It never started again. The head was blown. There’s no way it could have started that one last time without Divine intervention. Of this I have no doubt.

For all the trouble it was, the Amigo will always be a fond memory for my grandson. What comes to mind when I think of that vehicle is something more philosophical and analogous.

It started out shiny new. All the parts fit together and it worked. It wasn’t perfect, even from that momentous day in 1776 when it rolled off the assembly line neither did it start out as a fine-tuned precision machine, like a Rolls Royce, but it had good solid bones and the potential to be reliable for a good long time for whomsoever owned it. It began as a vehicle for the common driver; nothing fancy, just a hard working sporty little conveyance to get from here to there and the freedom to try.

But as often happens, time took its toll. Things started malfunctioning and over time jackleg mechanics who had no idea what they were doing did patch jobs, like installing the wrong battery. Somewhere along the line, someone decided to remove the back seat, maybe so it could be used more like a truck than for passengers. Little by little as it slowly aged, various owners who were responsible to keep it serviced and running well, just let it go. And you know when something isn’t cared for anymore, decay happens. Dents and scratches don’t matter, because, who cares? No need to wash it because once deconstruction begins it looks the same whether clean or dirty.

By the time the last owner comes along, the one who sees the damage but also the potential and tries to shore it up with new parts, it’s already too late. Outside of a complete overhauling, starting over and remaking it from the inside out, the only possible outcome is that one day it simply fails. What happens then is the yet unfinished story. Does it end up in the junk heap of history like other once great notions or is it refurbished and restarted?

The odds are not in favor of the hopeful scenario.

The week before my grandson was to drive his Amigo off to college the first time, I had it serviced. Rotten hoses replaced, tune-up, oil changed, gaskets, broken motor mounts replaced, hoping this stop gap repair would give the car enough new life to keep it running a little while longer. But stop gap repairing of a disintegrating car is like putting a new patch on old fabric or pouring new wine in an old wineskin ... or trying to patch a reprobated nation, that is already too far gone, with too little too late retrofitted parts of morality and values. Sometimes God answers prayer and lets an engine roll over one more time for a short term, a reprieve for the sake of His elect. Historically speaking nations that turn their backs on God find that there has never been a man-made glory  too big to fail.

There is good news in this grim report. Some of us still cling to prayer and faith and believe that, no matter what, when God be for us, who can be against us? That doesn’t mean we might not be in dire straights sometimes, and have to call on Him for mercy and help but at least we know we can.

(Hebrews 4:16) Let us therefore come boldly to the throne of grace, that we may obtain mercy, and find grace to help in time of need.