Woke up this morning to torrential downpour. It promises to continue today and into tomorrow, July 4, 2013. Though we’ve had rainy 4th’s before, the last time I recall having to completely cancel our traditional gathering was nearly 20 years ago. July 1994 was one of the rainiest summer months on record for this area. Caused lots of flooding and put the kibosh on many holiday parties, not to mention firework displays. 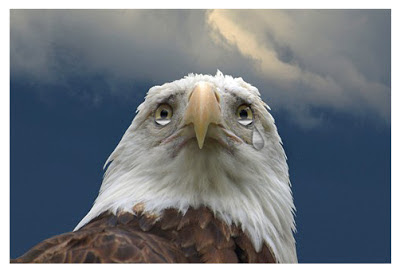 We were moving to our first lake house that weekend but we had still planned to have a cookout and maybe put up with the long car line to see the annual fireworks sponsored by Lanier Lake. But the relentless rain shut that down completely.

This morning, 19 years later, looking out the window as the island in the middle of the pond began to disappear beneath the rising water, I saw a frightening analogy.

We, as a nation, are sinking beneath the waters of determined change. While there’s nothing inherently wrong with change, and, as the saying goes, nothing is as constant as change, historically speaking, change that seeks to alter and/or destroy what has proven to be solid and foundational to growth and prosperity, ultimately self-implodes eventually, and sooner more often than later. The jackals of change always turn on themselves because they only care about empowering themselves. Unfortunately the damage done before that happens requires long-term repair.

This is not a new phenomenon; it’s happened numerous times over the centuries to countries rising and falling. There’s another old saying, insanity is doing the same thing over and over again expecting different results. Some things will just never work.

But this time seems to be different somehow. It’s reached a fever pitch. Almost as though there’s a sense that time is running out, there’s a psychotic frenzy underneath every new push to eradicate everything that once was revered as fundamental to the makeup of this country, the underpinnings that have made this country the one that people everywhere want to come to. This country, the one that has always stood for individual rights and freedoms, opportunities to pursue dreams and hopes.

This country, is now sinking under the fluid lies, drowning under the redefinitions of the basic principles that created it–and all for what? So that we can all be equally impoverished, equally unable to think via the exceptional individualism that has defined us for 237 years as Americans? So that we can all be enslaved to a few who think they know best how we should live, what we should eat, drink, say, think, do?

Rain is often a symbol for tears. It’s not just raining this 4th of July it’s pouring but what I can't help but imagine is that Heaven is sobbing. Regardless we'll carry on with our celebration, rain or shine, because who knows what next year will bring? Perhaps in the new egalitarian Utopia the parades and picnics and fireworks will be outlawed because, you know,  it might offend someone.