(Acts 16:22) And the multitude rose up together against them: and the magistrates rent their garments off them, and commanded to beat them with rods.  (16:23) And when they had laid many stripes upon them, they cast them into prison, charging the jailor to keep them safely:  (16:24) who, having received such a charge, cast them into the inner prison, and made their feet fast in the stocks.  (16:25) But about midnight Paul and Silas were praying and singing hymns unto God, and the prisoners were listening to them;  (16:26) and suddenly there was a great earthquake, so that the foundations of the prison-house were shaken: and immediately all the doors were opened, and every one's bands were loosed.

Lately I’ve noticed a recurring Word out in the blogosphere being spoken specifically to those who can/will hear. It began as a gentle appeal from the true faithful to the Body to abandon apostate teaching, refuting the false doctrine that declares if one believes in the doctrine then one gets to be spared tribulation. But now that the call to come out is growing with a new urgency, louder and stronger than ever before, the question is begged, for those of us who have long ago left the feel good false doctrine behind, are we really ready? Do we  honestly understand what is imminent? Is the concept of tribulation just a vague discomforting idea of general mayhem? 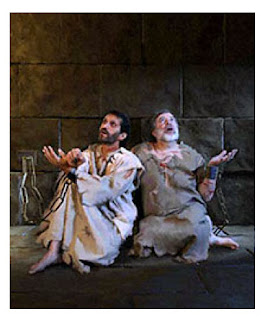 The first century Christians knew what to expect. First Jesus and then the Apostles told them they would suffer for His sake. And, in fact, Christians have been suffering because of their faith for two thousand years. The recent brutal murders of Christians in Pakistan and Kenya is a stark reminder for Christians everywhere that satan is not yet done.  But, however bad it is now, what must come promises to get decidedly worse before it gets better.

I readily admit that I struggle with being able to define this and how it will impact me and mine probably because by the world’s standards I have lived a soft life in America. Sure, I’ve had my occasional share of character building strife. I’ve had to roll pennies so I could buy a box of mac ‘n cheese and a can of green beans to feed my kids dinner. I’ve laid awake at night stiff with anxiety wondering how I would pay my bills or just get through the next day. I’ve done without, I’ve made do and I’ve made bad choices that came around to bite me. But I have never feared that I would be attacked by masked men with machetes and military weapons. I’ve never been tortured and jailed for not recanting my faith. I’ve never had my children taken from me because I wanted to homeschool them. I’ve never been shopping in a mall one minute and hiding from terrorists the next.

I’ve never been in shackles riding in a railroad car to an unknown destination and fate because of my religion.

If current event reports seem far away and not relevant to our daily lives we ought to know that, in this advancing evil age, anything is possible now. Anything. We can shore ourselves up with our examples Paul and Silas who knew all manner of tribulation, pain and sorrow and yet chose to preach to the other prisoners and sing hymns of praise after being beaten and chained in a dank prison cell. But saying we would do the same is a tad bit easier said than done.

So, for those of you who believe you are ready for tribulation just because you have rejected the left behind fiction, do you understand all the ways we can be tried? Do you know that sometimes tribulation begins within your own household or workplace? Sometimes we are tested and sifted to see if we can stand in ways we aren’t prepared for.

I have been saying over and over again that we are in the ‘get it or don’t’ era but now I believe we have progressed into the ‘be prepared’ phase. Dearhearts, there is only one way to be prepared for what is about to unfold before us–we must be ever at the ready to listen, trust and obey. Sometimes we are called to action sometimes we are told to endure with grace. Whatever our faith requires of us often seems more than we can bear, but we hold on anyway because faith is not just a good sounding word, it’s a lifeline.

We are given opportunities to practice unwavering faith in the small troubles, so that we can not only stand but be shining examples, like Paul and Silas, in the big Trouble.

Jeremiah 33:3 - Call unto me and I will answer thee and show thee great things, and difficult, which thou knowest not.