(Proverbs 16:18) Pride goeth before destruction, and an haughty spirit before a fall.

The rise and fall of a civilization has less to do with the influence of technological advancements and is more accurately attributable to the deficits and limitations of human nature. For all the change possible era to era, the singularly interminable condition is that of human self interest. It manifests in all manner of different forms, from blatant narcissistic selfishness to good looking puffed up self-righteousness, but the results of the repeating cycle–people rising up from altruism then declining by egotism–is predictable and precisely why man can never achieve, by his own efforts, the Utopian state regardless of good intentions and grand ideology. No matter how many times it is tried; mankind cannot make itself good. 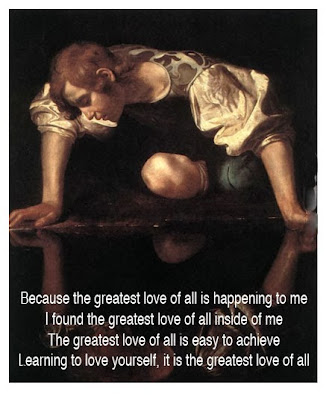 The open celebration of self love (pride) is the hallmark of a civilization having reached its peak and descent toward its inevitable destruction. Promotion of, advancement toward, and accelerated defense of the right to consider and satisfy self first is the death rattle of a terminally ill culture. Human nature is attracted to selfism like a drug addict to cocaine. And, in the same way addiction justifies itself, selfism dons the mask of ‘goodness that loves everyone’ to maintain its own perpetuation.

Selfism is a great pretender and masquerades as individualistic but is actually the counterfeit of individualism and in a dying society replaces independent accountability with a shallow feel-good, sound-good imitation that strives to be the same in order to prove it is acceptable. If it feels good...do it. If everyone does it then you’re okay, I’m okay, no need for standards of ethics or morality established by a higher authority.

Unfortunately, historically speaking, civilizations do not recognize the peak and downward slide until it's too late to stop and reverse the process. At the point of no return many look up just in time to see the train without brakes go over the cliff. Most never know what hit them.

In hindsight, provided there are survivors, historians can cite all manner of reasons why a civilization imploded and scattered–war, economics, religious differences, climate change, but rarely do historical accounts point to the one constant–humans just being human. Humans creating their own god of self and worshipping it until the inevitable happens–self destruction.

In a self-love society, self-esteem is promoted to a natural right and a way to feel rather than a value that must be earned. Therefore feeling good about oneself, rationalizing and excusing all behaviors, regardless how destructive, becomes the goal instead of holding oneself accountable to a high standard that then makes one worthy of esteem.

Here, in this waning era, watching the train pick up speed, racing toward the edge, I’ve been thinking back to the signs we missed. Thus far, among other things, I have noted the “me generation” years of the 70’s-80’s, subtly infecting the concept of self love as the first best love of all into children. Love yourself first and then you can love everyone is the smooth lie. Further, I have also noted that the poison seeps in easiest through the arts, especially music, because passion is the soft vulnerable entry spot of self and is best persuaded by those things that tap into the emotions.

Of course, the poison appears good, like flavored sugar water, easy to swallow, but it is not only non-nutritious, it is designed to destroy health, both physical and spiritual.

Selfism is a honey trap that is thematic and repetitive and devised by the one who is determined to take as many as he can with him into the lake of fire.