Recently I was discussing with a newly published author the downside to reviews on Amazon. I related a learning experience I had had once with a book I published for a first time author. The small book was written as a tribute to and a catharsis for the young woman who had recently lost her pet, a pit bull she and her husband had rescued from the streets and sure death. But more than that, it was beautifully written analogy.

The couple, against their own better judgment, took in the stray, whom they named Pet Bully, feeding and nurturing him back to health. Among other things, they invested in vet visits with funds they could ill afford to spend. Over time, the dog responded positively to their kindness and became a good watch dog. But a pit bull is an unpredictable and often willful animal and since the dog had been on his own for an undetermined number of months, he retained a dark side that occasionally caused Pet Bully to viciously kill cats and behave in other socially unacceptable ways. 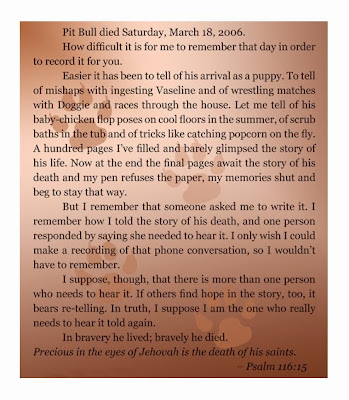 The author/owner tried and devised various disciplines that she employed to control those anti-social behaviors. Once, when Pet Bully had killed the neighbor’s cat, the carcass was wrapped around the dog’s neck and he had to “wear” the shame for most of a day. Another time, after the dog had threatened a neighbor’s child, the owner, in complete hysteria, removed a small plastic belt and unleashed her anger on the dog’s broad back. The belt wasn’t big enough to even make a mark but the moment described in the book was enough to cause a self-righteous back lash of outrage from animal rights/pit bull activists.

Again, the book was written as a tribute to a pet, the incidents shared each and all had a greater meaning for the author who loved and cherished the dog. But all of the reality of the book was completely lost on the dolts who only read in the text what they wanted to read, completely missing the point, i.e., that we all have a wild dark side and from time to time we each come to a moment of decision. Will we fight to control and contain our base destructive penchants or will we give in and do our worst, reaping the consequences?

The author, in her revealing of the belt incident, shared a defining moment for both herself and Pet Bully. She told the truth about her knee-jerk reactionary letting go and giving in to her human response instinct but she also recalled the split second decision that Pet Bully made. She described the dog’s eyes as deep black and cold as death, after the author had lost her cool and whacked him with the belt. As in a video in slow motion, she could measure the microseconds spent in conflict in those dark narrowed down slits. She could see the dog wrestling with his life before and after being rescued and cared for by the human who had just lashed him. She could see the raw animal struggle with what his instincts demanded of him and the better reason that spoke to the good side of the dog and of his potential future.

In a split second, Pet Bully, who could have easily maimed or killed his master, chose to be humbled by the discipline inflicted on him. His eyes went from evil to submissive. He hung his head and laid down. The author took a ragged breath and praised him for his choice.

But the more important lesson was lost on those who chose to rant and vilify the author. “I gave this one star because I couldn’t give it less,” one reviewer wrote. No amount of logic or rational explanation and reference to the greater message could sway those who were determined that the author was a ‘dog beater’. No counter with the reasoning of the rest of the story, the choice to save the dog instead of putting him down when he broke his leg, using the author’s meager savings to pay the vet bill. Nothing else mattered in the whole story, just the out of context telling of the beating. That became the narrow focus of the review bullies.

And thus the beatings of the review bullies took over and won because I caved and pulled the book. That became a defining choosing moment for me. I decided that the do-gooders would have to win that round because the shrill screaming was obfuscating the message anyway and, unfortunately, damaging the bewildered author.

So it goes, in this era, when truth as presented with a moral or a lesson that is not in any way acceptable to the new world order, the new bullies win by screaming louder, focusing on minutia, all the while donning the cloak of false righteousness. Rabid self-righteousness, as I refer to it, is an affliction nowadays. Opinions are rampant and bullies who are determined that no one can tell a story, a truth, or a life lesson unless it aligns with the new "feel good' groupthink dynamic, truly do have the louder voice.

The moral is: If you have a truth to tell, an analogy to share, one that does not meet the current standard as defined by the new rules, be prepared for assault from the real bullies in this declining age. Then you will find that you have reached a choosing moment of your own and must decide, is the message worth the conflict?

If so, stand. Bullies operate under the psychopathic desire to make others kneel and knuckle under. The irony is that those who would force others to be righteous as defined by them, whether in a humanistic or religious context, always present as better than good.

But it’s always a facade and those who bully under the guise of goodness more often than not have a darker agenda in play. Wolves disguised as sheep, ready to devour in the name of goodness.

How clever is the god of this world into deceiving us into thinking that bowing to temporal consequences can be clothed in moral quality. God knows our hearts. We had better know them, too. ~ A.W. Tozer
Create in me a pure heart, O God, and renew a steadfast spirit within me. Psalm 51:10
Posted by meema at Thursday, October 17, 2013