It is painfully ironic and profoundly appropriate to post this on Columbus Day because in so doing a startling contrast is revealed. Once, not long ago, and only as far back as the school days of my older grandchildren, Columbus, the explorer who is credited with discovering the land mass that would one day become the United States of America, was celebrated on this day. The history was taught in schools everywhere as an outstanding achievement. Today, in our carefully, diabolically revised and socially engineered curriculums, Christopher Columbus is reduced to a miscreant blamed for the dissolution of the indigenous people who once roamed the land that was to become America. 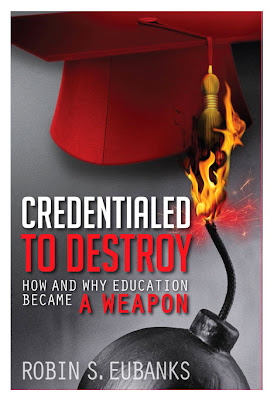 The subtle change from celebration to vilification of the beginnings of a new country is but one tell in the mysterious sorted story of how education has become a weapon used to conquer and destroy America from within. It is so subtle, in fact, few have noticed the reversal and the ultimate destructive impact on young minds.

In her new book, Credentialed To Destroy - How and Why Education Became A Weapon, Robin Eubanks, an attorney experienced in due diligence research, stumbled on information that set her on a journey that would help her understand what was occurring in American education.

Dumbing down, teaching to the test, teaching to the lowest common denominator, how do you feel not what do you think, the answer is not important, all of these concepts have been duly expressed by many and denounced with little if any progress in reversing. However, Eubanks gets to the root of the problem, not just moan about the symptoms of the disease, wherein are the dynamics of fundamentally changing American children from informed, individual thinkers, to “useful idiots” as Stalin referred to the masses he intended to enslave.

Although the book started as a blog, the documented research recorded goes far beyond what one could post in a blog. No one who is still able to think independently can read this intense and irrefutable collection of facts, links and data and still remain supportive of what is happening in the institutions that are redefining and irreversibly reshaping our children and, ultimately, our civilization.

Common Core Curriculum has been called other things, in other decades, the last was called Goal 2000. Nevertheless and regardless what it is called,  it’s the same Marxist song, one hundredth verse. However this time it has advanced much further than in the thirties, sixties and nineties. The question is begged, is it too late? Are the majority of Americans already so dumbed down this book might as well be written in Greek? Or is this book a life raft for those few remaining thinkers to grab onto and float to safety?

Though this book tells the tale, lays out the dark plan from its inception, it does not presume to present the solution. That must come from those who are willing to open their eyes and choose to speak out. Many are already doing so and experiencing push back because this time, the Agenda is more deeply in place than ever before.

Sometimes we have to stand up and fight evil by calling it what it is and just saying no.  Robin Eubanks should be lauded for her bravery.

There is danger from all men. The only maxim of a free government ought to be to trust no man living with power to endanger the public liberty.  ~ John Adams