...an aging fortress stands in disrepair, crumbling turrets, drawbridge gaped open because the now rusty pull chains were compromised long ago; the effort required to maintain the once mighty bulwark had become what was finally deemed a lost cause.

... that the history and original purpose of the fortress is now a vaguely recalled legend, largely unknown to the youngest citizens, heirs of heirs of heirs to the builders.  The memory of the founding ragtag group of misfits has become irrelevant. That they had fled from oppression and had been determined to establish a theretofore untried type of society where each individual was granted autonomy up to the point of not treading on any other individual’s right to self-rule, was not only no longer taught generation to generation, but was often summarily criticized and denigrated. 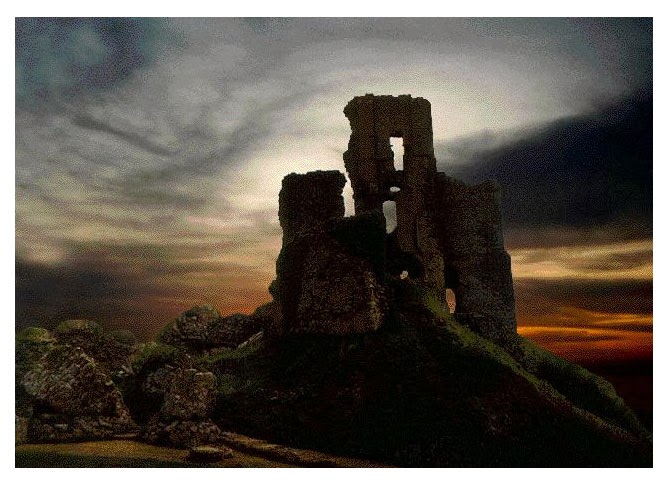 ...in spite of noble beginnings–eventually, given that the inherent human failings of the original group allowed that some personality types were compelled to be controlling, and who therefore were not content with simply minding their own business and leaving well enough alone–conflict was inevitable, inside as well as outside the walls.

…regardless that the dynamic of the founders was established with the intent on self-rule and individual accountability based on a set of universal standards, the ideal could not remain a functioning reality but not because it wasn’t worthwhile. Humans, even when temporarily united by a single cause in a desperate moment, are imperfect creatures incapable of sustaining perfection and as soon as the threat is past, inevitably return to their natural, discordant ways.

...over time, even before the drawbridge was sabotaged, small breeches in the back wall, gone unnoticed or ignored, allowed for the infiltration of other humans desiring all the benefits of a self-ruled society but bringing with them determination to incorporate their own ideals into the social construct. Gradually, the total sum of the population, fully amalgamated, no longer cared to remember that there was once a single ideology that their ancestors had built the fortress upon.

...era by era, as the populace multiplied and changed, life within the walls followed the ancient, predictable patterns of humanity. Despite advances in the collective knowledge, the understanding of natural law, inventions created for good are often turned to do evil. Thus, in spite of the ongoing illusion of improvement, each era mirrors previous periods, with minor variations, because, regardless of grand intent, spectacular creativity, and determination to do differently, humans come into the world coded to behave as though following a script. As bad as one era might seem, the next is always destined to be worse, even if it appears to be progress toward immortality or a lull in the process toward self-destruction. As the original standards fall, one by one, each representing a blow to the gut, every thread of the high ideal is pulled out or replaced either in full frontal attack at the drawbridge or in the quiet shadows on the back wall, internal, irreparable long term damage is done. Not just to the physical representation of the civilization, but to its shared soul.  Once the soul is compromised beyond recognition, the standards fully decimated, the inevitable end is unstoppable. The question becomes not if, but when.

History, the ultimate teacher and predictor of the future, faithfully records civilizations rising and falling. The one constant and trackable cause is imperfect human nature ever craving to design perfection that it can visualize and begin but can never sustain. Even a noble fortress, once built with the best of intentions and integrity, must be populated with human beings who are inherently self-centered and unable to recognize that some among them are miscreants driven by an insatiable desire to rule others and that some are more than willing to let them in exchange for something.

Imagine that the last inhabitants of the fortress believed, in spite of the wear and tear and disrepair, that it would stand forever.

Imagine their shock and horror when the day finally came, the hoard attacked, and left it all in ruin.

(Revelation 18:7) How much soever she glorified herself, and waxed wanton, so much give her of torment and mourning: for she saith in her heart, I sit a queen, and am no widow, and shall in no wise see mourning.  (18:8) Therefore in one day shall her plagues come, death, and mourning, and famine; and she shall be utterly burned with fire; for strong is the Lord God who judged her.