My sister, Jo, and I like to putter around in a wonderful consignment shop that was once a Walmart in Buford called Queen of Hearts. Strolling the aisles among the booths is so much more than a walk back in time. I cannot get enough of the unfettered creative energy on display. It’s impossible to take it all in. I marvel at all the ways folks can repurpose old things, bringing new life to objects that have long ago had their day. Mostly, the diehard artist in me rejoices at the affirmation that ingenuity lives. As automated, robotic and manufactured as we have become, individual creativity remains an unstoppable condition that finds its way out from under to express itself as still useful. Still relevant.

Uniqueness is the norm in this place and prevails in a completely productive yet non-competitive environment that stimulates my waning creative juices.  It’s impossible for me to get out of there without buying something. What I want is to just buy all of it. But then I’d have to open a place like it and sell it so, prudence wins. I buy a used book instead. Last time I bought a lamp for $20 that was so perfect for where I needed it I still can’t get over it. Had I bought a brand new lamp somewhere else for triple the price, I could not have been more pleased.

When I got the book home I noticed there was a handwritten inscription on the front end leaf. The book was a gift for someone’s 40th birthday in 2000. The casual cursive scrawled delicately at an angle on the page and signed the giver’s name with love. Then I noticed it was written in pencil. Pencil. Who writes a dedication in pencil?  Maybe that’s what the giver had to use? An old pencil pulled from the junk drawer? You know you have one.

This set me thinking. Which I’m sure is a shock. An analogy presented itself that I had to explore. So, I asked, what’s wrong with a pencil? Too informal? Too rough drafty? The sentiment is still there, some fourteen years hence, and will likely be there for as long as the book exists. 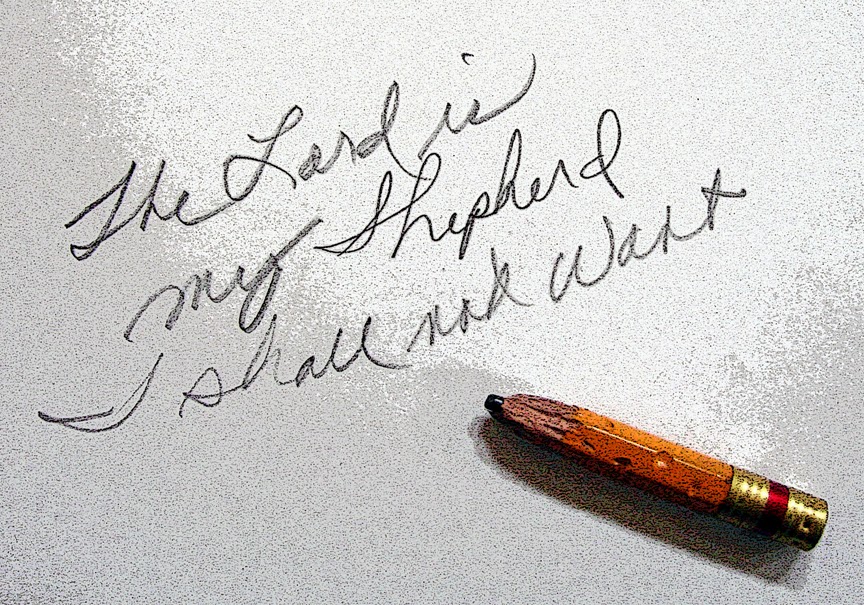 Took a couple days letting this roll around in my head but here’s what I concluded:

From my insecure perspective, most other folks are ball point pens. They move through life making confident indelible strokes, often in perfect cursive. Then there are the really bold who are more like Sharpies. You know the ones who make loud marks and thus naturally stand out. In smaller numbers there are those who are broad tipped permanent markers but that’s another analogy for another day.

Then there’s me. More like a pencil. I’m utilitarian. I’ve been around awhile so I don’t need batteries or electricity to do what I do. No fancy mechanics, push buttons or shiny parts. Just wood around some graphite. The comparatively pale marks I make do not stand out, and can easily be erased. My eraser was worn down long ago so as I have aged I have had to be somewhat more careful about what I put down and less impulsive because otherwise I just have to cross out the mistake which sits there exposing my imperfections. I have some bite marks that remain to attest to some hard use, times when thoughts had to be pulled out under duress. My brass end is still in good shape but it’s just a detail now with no good purpose, since the eraser it held is gone.

I have been worn down by use and that’s a testament to something, not sure what, but I optimistically want to think this is a good thing. I can be sharpened either by a fancy pencil sharpening devise or by a knife. Which just means I am open to workarounds.

I’m shorter, thus look fatter and I am probably ready to be replaced. But! I can still do what I was created to do. In the Master’s hand, I can compose and create as He sees fit.

And that’s about as good as I was ever meant to be.