Okay, it’s not another thing - it’s the same old thing. I’m a broken record, repeating over and over, trapped in one groove. However, I’m not completely alone. I recognize the same frustration in others who have been sounding the warnings for more years than I.

It is very much like screaming in a vacuum, where you can see your mouth moving forming words that cannot be heard. But it’s not just that no one can hear, the angst comes from knowing that no one is listening, no one wants to hear that we are past the point of no return. And I, along with others, like Michael Boldea and Chip Brogden, and some who have already gone on to meet the Lord leaving behind solid Christ-focused teachings, have said in every way I know how that the day does come when you do pass the point of no return. The point in which there’s no going back, no reset, no slowing, stopping or reversing it now.

That day has come. I can’t find a way to say it any other way. 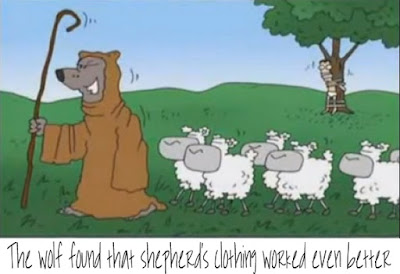 Recently I received a forwarded email from someone who thought I would appreciate the message there in. It was a ‘prophetic’ word from a pair of modern day self appointed end days prophets who run a ‘prophet school’ (whatever that is). The gist of the message was about God soon revealing what a glorious and amazing thing is about to unfold on mankind and souls being won over in a flash of turn around.

Really? Honestly, that would be wonderful but I don’t find that in Scripture though, certainly not in Revelation. What I find is trouble and tribulation and ‘they repented not’.

Unfortunately, based on first hand personal experience with this kind of feel good prophesying I can tell you what is wrong with it, not that I wouldn’t love to believe it. First, scrolling slightly down the page, there are advertisements for jewelry and books and CDs and Videos. Red flag. Secondly the ‘God said’ technique of playing the higher authority card is the biggest red flag. How can one argue against another saying ‘God told me’ or ‘thus sayeth the Lord’?

Here’s the part where the frustration comes in: I knew it was useless to respond to the sender of the email that I see right through this kind of thing. First of all, speaking out does not cause critical thinking to commence and instead instantly labels me as a cynical doomer. You see, I ought to be thinking positively not negatively. Right. So, this shuts me down. How do I tell others that those who are making millions telling people what they want to hear rather than what they should be paying attention to are at high risk for being blind-sided?

How do I make others understand that selling hope coupled with fear couched in hidden agenda is the worst kind of deluding. But that’s exactly where the wolves-in-sheep’s-clothing get their hooks in. Because, of course, people want to believe that there is hope, that there is light at the end of the tunnel. I get that completely. But what if these good news merchandise peddlers simultaneously warn of catastrophe even as they counter offer with hope only as a way to keep customers? Like a famous, once disgraced, TV evangelist who is selling solar generators for a mere $3500 donation to his ministry. A banner runs across the bottom of the Youtube video as he is explaining with terrifying graphics, that we could be nearing a time when increased volcanic activity could block the sun and launch solar winter.

Tell me again how a $3500 solar generator can generate power when there is no sun?

It’s gotten so bad that even when we recognize the truth about the humanist self-help preachers/gurus who rake in millions and are responsible for leading so many away from the Gospel, we hesitate to speak out rather than be accused of being ‘unloving’, ‘judgmental’, and - heaven forbid - gloomy!

Are things going to get better? Yes. Before they get worse? No.

If you’re still reading - okay, so now what? Where do we go from here? What if we decide to get real and stop being sheep? What shall we pray for, brace ourselves for? Who do we believe/trust?

I have personally found T. Austin-Sparks’ teachings to be timeless and foundational.

Be strong in the Lord, relying on His mighty strength. (Ephesians 6:10 ISV)
“I can only remind you again of what a large place that has in the Word of God: be strong, be strong in the Lord in the strength of His might, be strong in the grace that is in Christ Jesus. Think again. Want to understand why the winds are allowed to blow so fiercely... the storms? To get us away from that natural, easy-going-ness or cheapness, lightness, frivolousness and to make us people of weight. Strength – through testing, through adversity – strength... to endure throughout all ages. There is much which is going to be carried away in the last great testing, and if, therefore, trial and adversity is the only way to deepen us, to put caliber into us, I suppose we must expect more of it as the time shortens.”
For Him,
Meema

(Matthew 7:15) Beware of false prophets, who come to you in sheep's clothing, but inwardly are ravening wolves.  (7:16) By their fruits ye shall know them. Do [men] gather grapes of thorns, or figs of thistles?
Posted by meema at Wednesday, August 05, 2015