I think about my dad on Father’s Day. He died in 1979. For most of his life, he worked six days a week, ten hours a day, selling men’s shoes. When I was a child, in Houston, he rode a bus to town and home again, leaving the family car for my mother to use. On Sundays, his only day off, he took us to church in the morning, then, after lunch, spent the early afternoon cutting the thick St. Augustine grass with a hand push mower. He finished the job by meticulously, laboriously, edging with a sharpened shovel. Next, he washed and waxed the car, by hand. That done, he made repairs to our house or worked on an ongoing project, like building a brick barbecue pit. He always whistled as he worked, happy to be outside in the sun and fresh air. He claimed it was detoxifying to work up a sweat. I followed him around like a pesky puppy asking questions he always had time to answer. He taught me how to soap a screw so it would slip into dense wood like it was butter. He taught me how to drive a nail, straight and true. There is a tall Texas pine tree in the back yard of my old childhood home forever fortified with pounds of ten penny nails. 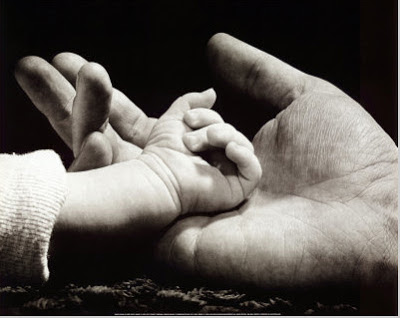 When he had completed his tasks, he took a shower, made himself a Tom Collins hi-ball and sat down to enjoy a late afternoon baseball game on TV. His pleasure and sense of self-satisfaction was palpable. Sometimes, at our begging, he would forego the game and take us to Stewart beach, an hour away in Galveston, for a romp in the salty Gulf breakers. Returning home, after dark, sand wedged between our toes and plastered miserably in our swimsuits, we’d all fall out of the car in a mad competitive dash for the one bathroom, leaving him behind to clean up. I have no memories of him complaining about anything, except maybe never being able to find his nails and screws.

He wasn’t an overtly religious man, but he taught me the Lord’s Prayer. He wasn’t an educated man, but he loved numbers and he insisted that I learn my multiplication tables by heart, and practiced with me after dinner every night until I knew them upside down and backwards. It was his gentle patience and ability to communicate with me within the framework of my learning zone, that made it possible for me to finally understand the complex mysteries of fractions. This was a teaching skill my college-educated fourth grade teacher did not own. Until recently, I have never thought of these memories in the context of time expended. But now I wonder, when did he have time to do all these things?

There is a lot of discussion, nowadays, about good parenting and what skills, instinctual or acquired, define a good parent. The emphasis primarily centering on time spent with children. Mothers, typically, have always understood the importance of spending time with children and have filled that need naturally. But now modern attitude requires fathers to participate more in the daily care and nurturing of their offspring in an advancing egalitarian effort to “include dad” in the raising of kids. This is good, I agree. Diapering and feeding and bathing does foster a certain amount of bonding. But what about the fundamental significance of good influence? What about the quiet strength and integrity fathers could impart to their children by simply being solid role models? And what makes a good role model? Is it honesty? Is it a strong work ethic? Is it a visible faith in God? All of the above? Yes. But also, I believe it is a genuine interest in, and willingness to meet, the needs of his child, over and above his own needs, beyond his own agendas, physically, emotionally and spiritually.

If I had to declare who had been my primary care giver, I would have to say it was my mother. If parenting hours determine this and could be charted, I’m sure her time invested in me far exceeded that of my dad’s. However, there is no denying the dynamic influences of my father are forever entrenched in me. You see, ultimately, it wasn’t how much time he had to spend but how he spent it that molded me. And even more importantly, it wasn’t as much about time spent, as it was his forthright example that forged me. Frankly, I doubt he ever diapered me. I don’t recall him doing any maintenance on me at all, not even kissing a boo-boo. But by virtue of his being a selfless, caring man, willing to listen and share, he was a good... no...he was a great father.

How could he have been more than that?

(Hebrews 12:9) Furthermore, we had the fathers of our flesh to chasten us, and we gave them reverence: shall we not much rather be in subjection unto the Father of spirits, and live?