“There are many brands of treason in the Christian camp. Men who deny the historicity and authenticity of God’s Word; worldlings who hobnob with the enemy; indifferent church members who come not to the help of the Lord against the mighty–all these are traitors. It sounds good to talk about forgetting all our differences and closing ranks to face the foe without, but we may lose to the foe within. Paul recognized two threats to the church–wolves from without and false leaders within.” (Acts 20:29, 30)
~Vance Havner

Sometimes I pull on the full armor of Christ and venture out into the wild, wild blogosphere where I often find the most interesting commentary and perspective, especially from those in other countries. It’s a great way to study the various ways people of different cultures look at the pressing issues of humanity. 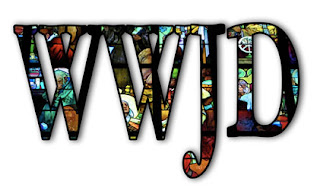 Recently I tossed in my two cents in a discussion in the Archbishop Cranmer blog on the topic of the acronym WWJD (What Would Jesus Do). Speaking from an American view point and, more importantly, a mature Christian, I offered a bit of history along with my perspective, which I felt was something lacking in the conversation.

I posted:
The WWJD campaign was launched by a youth minister, Dan Seaborn, in Holland, Michigan in the 1990’s. It was specifically aimed at Christian teens. The goal was implemented by stamping the WWJD logo into rubber bracelets that the kids wore to remind them that their choices should reflect what they had been taught about expectations for Christian behavior. Later another campaign added the bracelets with the acronym FROG–Fully Rely On God–as the response to WWJD.
And then I added:
When the WWJD phenomenon was all over the place, even in schools, which could not happen in today’s world, less than twenty years hence, there was something that seemed a bit shallow to me. But I understood the warfare involved. I knew then, as I know now, that we struggle against dark principalities for the hearts and souls of our young. They are pulled away from the faith by the glitter that is not gold. Thus, we have converted our worship service to shout louder than the siren call of the world in hopes of keeping the youth in the church with screeching, thumping, wailing rock and roll noise in place of reverent music. To make it more comfortable we have replaced dignity with casual dress, casual language, even removing symbols like the cross from the sanctuary–all efforts to modernize and glam up Christianity in order to keep our young.
In effect, it seems to me that, in our sincere efforts to stay relevant and attractive, we have simply compromised with the Devil.  Vance Havner put it this way, “The devil is not persecuting Christianity nowadays – he is professing it.”
So, WWJD? I think the better question is, WGG - What Grieves God? If we do not know the answer to that we cannot begin to presume what He would do.

It is an ancient recurring story and common error for humans to rationalize that God has evolved right along with the current version of man. I once had a young woman remark to me with an attitude of compete authority that "God doesn’t care who you sleep with." That made me wonder what else God doesn’t care about anymore. Does He care about liars and lying? Does He blow off thievery now? Does He simply cherry-pick what is right and wrong in the same way we do?
In our revised, enlightened, updated, egalitarian, tolerant, diversity-embracing paradigm are we to assume that God not only approves of our advancement on the path to an anything goes New Utopian world of Full Self-Awareness, but that He is on the sidelines proudly cheering us on? Really?
In the words of A W Tozer, “It can only be a cause for deep regret that the fear of offending has silenced the voices of so many men of discernment and put Bible Christianity at the mercy of the undiscerning.”
So, let’s be crazy and consider, for a moment, that God is, was, and always has been the same. That we are the ones who adapt to accommodate our base humanism not He. What if God still sees sin as He always did?
Let’s revisit 1Corinthians 6:9-11 with an eye to seek that which has become commonplace in our modernity but which might just possibly still grieve God.
(1 Corinthians 6:9-11) Or do you not know that the unrighteous shall not inherit the kingdom of God? Do not be deceived; neither fornicators, nor idolaters, nor adulterers, nor effeminate, nor homosexuals, nor thieves, nor the covetous, nor drunkards, nor revilers, swindlers, shall inherit the kingdom of God. And such were some of you; but you were washed, but you were sanctified, but you were justified in the name of the Lord Jesus Christ, and in the Spirit of our God.
Fornicators and adulterers shall not inherit the kingdom of God. God did not declare that all sexual activity is sinful. Fornication in general and adultery in particular refers to sexual activity outside of the marriage relationship between a man and a woman. This activity was as rampant in first century Corinth as it is today. But modern society prefers to believe that God has changed His mind about this. He doesn’t care who you sleep with, even if it’s not your spouse, because God 2.0 is hip now. We know this because the acceptance of fornication as normal is deeply embedded in everything we see and read, so this clearly confirms that God doesn’t care. And even if we might briefly feel vaguely convicted about our sin, we console ourselves that we get a free pass because we believe in God.
Idolaters shall not inherit the kingdom of God. Idolatry is not just bowing before a graven image and is often the hidden sin because it dresses itself up as good in man’s eyes, like, for example, the god of ‘health and fitness’, but any obsession in something that consumes someone’s time and thoughts counts as idolatry–which is anything that someone puts in place of God. The list is long–the key word is ‘obsession’ as opposed to moderation in all things.
The effeminate and homosexuals shall not enter the kingdom of God. It is not politically correct today to suggest that such activity is unrighteous or to reject the concept that it’s a new kind of ‘normal’ that must be not only accepted but openly embraced if not celebrated. Those who wish to turn this mandate into a reason to hate and vilify Christians for their ‘intolerance’ miss the point. God is the Creator of the Rules and the Natural Order. We are not told to hate homosexuals. We are simply told not to participate in homosexuality because practicing homosexuality will keep one from entering heaven.

Thieves shall not enter the kingdom of God. It isn’t the act of stealing that is the issue as much as it is the fact that one who can justify stealing from another cannot be justified in Christ without recognition of the sin. Regardless if the person doing the stealing is rich or poor, without conviction, just as in the case of any sin, it will still keep one from entering heaven.

The covetous will not enter the kingdom of God. This one is tricky because of hidden elements that refer to having an uncontrollable desire to possess something or having one’s way. Covetousness blinds one into committing sin in order to satisfy the god of Self Desire. It can be more subtle than simple materialism and manifests itself as determination to manipulate another in order to cause him/her to submit in some way. Coveting anything which belongs to another, be it material goods or another’s body, heart, mind, or soul will prevent one from entering heaven.

Drunkards shall not inherit the kingdom of God. Children of God have no need to dull their senses with addictive substances. We must be able to think and reason clearly which cannot be done if we are enslaved to anything. Drunkenness, consciousness altering drugs–anything that causes one to lose focus and rationality, is included in this. It also falls under the rule about idolatry because addiction is just another type of obsession and pulls one far away from God which causes blindness that can lead to death. Those who give themselves over to intoxication/addiction of any kind will find that it blocks their way to heaven.

Revilers shall not inherit the kingdom of God. This speaks to those who are quick to speak against anything that has to do with Christianity. Atheists often troll Christian forums to insert their opposite views into the interactions of believers in hopes of causing discord and planting doubt. They are revilers. Countless numbers of men and women of God have had to endure reproach for their faith with the Son of God as their example. But there will be no revilers in heaven.

Swindlers shall not inherit the kingdom of God. Flimflam men of all kinds are included here. A swindler is a different kind of thief because he/she often hides behind a mask. The religious con-man, along with the secular belongs to this group. Those who prey on others by trying to take advantage of their weaknesses would also be included. Swindlers will not enter heaven.
If we really want to know What Grieves God, perhaps we should posit What Jesus Wouldn’t Do instead of pretending we can say what He would. In this reprobated era, we compromise daily with the world both in and out of the church, but we ought not to ignore that, while God has unfathomable patience, He does finally go from grief to wrath.
It’s a documented fact.
For Christ,
Meema

(2 Chronicles 19:2) And Jehu the son of Hanani the seer went out to meet him, and said to king Jehoshaphat, Shouldest thou help the wicked, and love them that hate the Lord? for this thing wrath is upon thee from before the Lord.
Posted by meema at Saturday, August 24, 2013