We had the honor of attending the memorial service for LCDR Ira Dozier Hozey, Jr. US Navy (Ret). Mr. Hozey was born in Jersey City, New Jersey. He retired after 25 years of service from the United States navy, having served during both the Korean Conflict and the Vietnam War. He was a member of American Legion Post #120. He was a member of Waynesboro First United Methodist Church and the Home-Hargrove Sunday School Class. He is survived by his wife, eight children, eighteen grandchildren and three great grandchildren.

Born in 1930, Ira enlisted in the Navy when he was just sixteen. His skills and aptitudes landed him in an elite submariner division. He served his country with integrity and after retiring lived the balance of his life in the same manner. Ira Hozey belonged to an era that is rapidly passing along with the men and women who defined patriotism and honor much differently from the modern point of view.

Ira served his country and lived his life with the unwavering faith that God is in charge.

Being somewhat numbed by the knowledge of what is now happening to this country, the loss of freedoms won with blood, the decimation of godliness and radical redefining of faith both inside and outside the Church, it takes something really profound to move me to tears. But as we walked from the back, rounding the church to the front, I was taken by surprise when I saw the honor guard standing stoically and suddenly I felt my eyes stinging. The group of aging vets, men and women, who volunteer to attend the last rites of those who valiantly served, stood at attention, each holding an American flag, in the hot Georgia summer sun as memorial attendees entered the church. 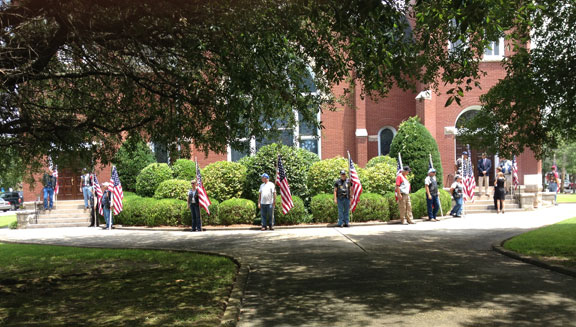 I knew that most of those elder vets were probably remnants of the survivors of the Vietnam War, the war that took so many young men and women, who would be my age now if they had not died so prematurely. This is what struck me and caused my eyes to blur with tears. This rag tag collection of my peers, all graying, some with pot bellies and  missing teeth, most standing straight even as arthritis sent pings of pain from old knees and hips, and still they stood, adamant that honor was due and therefore must be given.

At the conclusion of the service a Navy Honor Guard performed a flag ceremony and the sound of a lone bugle played Taps. A deep melancholy surrounded the audience and I was compelled to realize that if ever there was a time to weep for what was once a great notion, it was that moment, as those sad notes filled the sanctuary, echoing forward to now, mourning that which is gone and can never be restored without true faith, integrity and honor–as is defined by God, not man.

Day is done, gone the sun,
From the lake, from the hills, from the sky;
All is well, safely rest, God is nigh.
Fading light, dims the sight,
And a star gems the sky, gleaming bright.
From afar, drawing nigh, falls the night.
Thanks and praise, for our days,
'Neath the sun, 'neath the stars, neath the sky;
As we go, this we know, God is nigh.
Sun has set, shadows come,
Time has fled, Scouts must go to their beds
Always true to the promise that they made.
While the light fades from sight,
And the stars gleaming rays softly send,
To thy hands we our souls, Lord, commend.
For Christ,
Meema
(Colossians 1:12-18) giving thanks unto the Father, who made us meet to be partakers of the inheritance of the saints in light;  (1:13) who delivered us out of the power of darkness, and translated us into the kingdom of the Son of his love;  (1:14) in whom we have our redemption, the forgiveness of our sins:  (1:15) who is the image of the invisible God, the firstborn of all creation;  (1:16) for in him were all things created, in the heavens and upon the earth, things visible and things invisible, whether thrones or dominions or principalities or powers; all things have been created through him, and unto him;  (1:17) and he is before all things, and in him all things consist.  (1:18) And he is the head of the body, the church: who is the beginning, the firstborn from the dead; that in all things he might have the preeminence.