Then Sings My Soul

In the midst of all the ever mounting bad news there is this golden hope: from this point forward, no matter what the world thinks of us, says about us, or does to us, we have the Balm of Gilead to calm us and guide us through the valley of the shadow of death. Those who simply cannot understand this, who make fun of and scorn those who do, are poverty stricken and should be pitied because they are missing out on a huge benefit of being a member of the Body of Christ. Notice I didn’t say ‘Christian’. That’s because the title or label has become synonymous with being a religious fool. And perhaps rightly so. While we were sleeping the wolves have sneaked in and decimated the flock. Chip Brogden says we need to give up referring to Christ’s people as the ‘church’. He prefers to use the ancient term, ‘Ekklesia’ which is a broader term that leaves out man-made doctrinal differences. 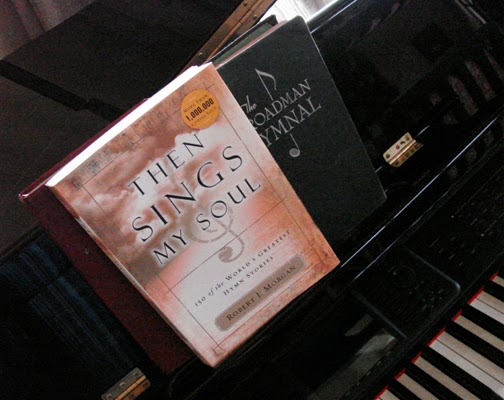 But what’s in a name? God knows who we are and what we call ourselves matters less than what we do to represent Him. When one is older than dirt, like I am, for example, representing Him means less physical activism and more prayer. More quiet worship and praise. Amazingly this is where we find our comfort in the here and now. While it is awesome to know, no matter what, we have eternal life to look forward to, we can find in praise and worship that we are held up and assured as the hounds howl and the demons snarl and bang at the door. Let me just say peace in the storm is no small perk.

I just finished reading Then Sings My Soul by Robert J. Morgan. It is a collection of stories about the origins and authors of the old standard hymns that have been employed for centuries by the faithful to lift their voices in melodic praise for Him. Each hymn is reproduced next to the story of how it came to be. From the first entry, The Lord Bless You and Keep You, I alternated between being weepy and overjoyed. I didn’t realize how many of the 150 hymns I knew at least the first stanza to. Every page turned brought me back to an old friend I didn’t even realize I had missed.

As I read the histories of the devoted individuals who recorded the depths of their souls into poetry put to music over the span of hundreds of years, in spite of all the differences, upbringings, often dire circumstances of their lives, the tragedies and struggles of the authors, I found a single characteristic that could describe them each and all–unwavering faith that our Sovereign God, Creator, is also unwavering in His promises to those who choose Him. Life here on earth is often nothing but trials and tribulation. Non-believers like to say there can be no God because a good God would not allow such trouble. The authors of the old hymns could never have been disillusioned by such a myopic concept. They lived, suffered loss and survived troubles most modern Christians would be hard pressed to endure.

And yet they praised Him. In their faithfulness, they left a stunning treasure of words and notes that provide a way for the devoted mind to express itself, the heart to bare itself and the soul to sing.

I know modern worshippers prefer a rip roaring concert, ear drum destroying cacophony of amplified noise to feel as though they are in a state of devotion and who am I to say they aren’t? But I, personally, am not comforted by most of the new praise and worship music. I can most definitely be entertained by it but not necessarily brought to a place of feeling as though I have entered my closet to request a one on One audience with my Creator which is what I need more and more now.