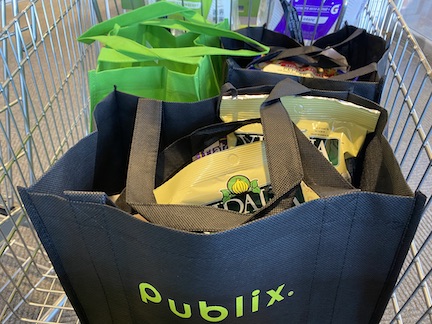 We had a few errands so we went together. To save some time and prevent him from having to sit in the car waiting for me, he dropped me off at Publix and drove off to get his stuff done. I told him not to hurry.

I always have a short running list on my phone, but I also have some random things not on the list long needed but never added to my cart in my typical shopping rush. Time is such a dictator and does not allow for meandering or dawdling.

But, taking advantage of the serendipitous break, I granted myself the luxury of going up and down the aisles, stopping to read labels, picking up products and looking at shelves often ignored and whizzed by. Thus I found a few things that I had been wanting but never could take the time to find where they were. Grocery stores don’t always categorize the way my brain does.

When I checked out I had filled up three Publix totes.  And then I sat out in the foyer to wait and people watch, one of my favorite pass-times that I never get to do anymore because, you know, time is always barking commands at me.

Young and old, they scurried in and out. Each occupied with their own lists in their heads and on getting their provisions as quickly as possible as though a stop watch was ticking.

Some smiled at the old lady sitting with her cart next to the automatic door that opened and closed five times a minute. I smiled back. I also blessed them, unbeknownst to them, wishing for them wise choices, peace and resolutions to the ties that bind them.

Like an unexpected pause in the great continuum, the demands of a busy life took a breather. I could thank God for those precious free moments that allowed me to sit with the basket of supplies that I was able to gingerly pick out and buy. I have many memories from my younger days of having to do without not because I didn’t know where to look but because I couldn’t afford it.

As I sat there I hoped all who entered were able to get what they needed and that, at some point, they would give thanks that they were able to. Gratitude is such a great equalizer and healer of angst.

Little moments of clarity shine like beacons in the fog when life is too much with us.

On the Art of Learning 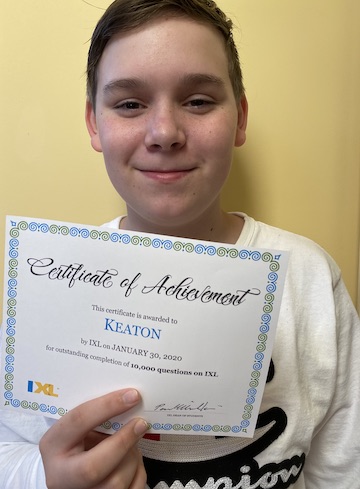 How easy it is for us to believe that education can only be acquired by having information shoved into us 6-8 hours a day in an institutional setting. Given modern technology and how information is instantly available to anyone with a cell phone, the long standard systemized method of imparting knowledge is almost obsolete.

Learning how to learn is as important a life skill as the sum of accumulated knowledge. Learning how to use available resources and instantly find an answer to a question that then is added onto one’s body of knowledge, is the best definition of education.

I get it, we are all wonderfully and beautifully made by our Creator. Some learn best in a controlled environment, some learn better in a more relaxed format.

What is so grand about having the option of being able to learn in the way one learns best, is that, at the end of the process, one has actually learned.

Isn’t that the point?