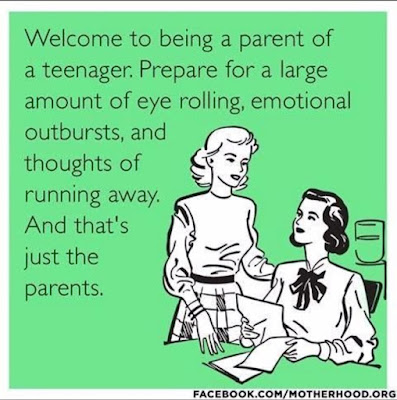 When you’ve been around the block a few times, you can’t help but know a few things. Some knowledge comes easy, then there are those hard earned bits. Parenting, for example. In these strange quarantined days, when parents and teens are forced to spend more time together, in the interest of maintaining mental stability I felt compelled to offer some perspective.

It’s well known that parenting is a process that no amount of reading or attending classes can prepare you for. Some skills, or lack thereof, are naturally acquired from how you were parented, producing both good and bad results. In that regard it’s also a learning curve. You just have to figure things out as you go mostly. You dive into the middle with high hopes fostered by the biological compulsion of love for your offspring and work your way out to both ends.

The two toughest challenges in a parent’s progress are the toddler years and the teen years. Either and both can be the primary cause of premature gray hair. The upside to the toddler years, though, is that you, as the appointed person in charge, have more power to contain irrational behavior. You are bigger than the child and you can set firm boundaries that the child can rail against but cannot escape.

Once a child has reached the threshold of broadened horizons, which begin as they are let out into the world of school and daily associations with people the parent does not know, the clock begins to tick toward the inevitable day of reckoning. When the teen launches a life outside of the parental home, other influences, (and in today’s techie world this is a huge impact), reduce the parent’s control dramatically.

Couple this reality with the biological defect of an under-developed frontal cortex, that often issues unwise directives to the teen brain, one can predict and indeed expect a collision of wills between parent and child.

This is not new, though parents living in the stressful middle of teen management, often feel as though they are not only alone, but perhaps might be pioneers, frontrunners  exploring new never-before-experienced frontiers of human development.

Apparently, when, at approximately the age of frontal lobe maturity hits at around age 26, there is also a phenomenon of amnesia that occurs. All previous memories of what the teen years were like, for the fully developed young adult, somehow disappears or fades to a blur. I believe this is God’s way of preserving the species because no one would willingly reproduce recalling the difficulties of the common-senseless rebellious decade.

Really, the best thing to know is that there is no easy way to get through the teen years without herculean patience and a lot of prayer.

So, based on personal experience, and having survived TDS - Teen Dysfunction Syndrome, more than once, I can offer this lame hope - It does get better. One day your teen reaches young adulthood and realizes how amazingly smart you have become in just a few years.

Eventually, as they become parents, you get to observe, from a safe distance, as they too experience their own bout with TDS. Life is truly a circle and what goes around comes around, you might muse. You also might offer up your hard won wisdom occasionally - Hold on. Stand. Do not enable or buckle. When they roll their eyes, scream at you that they hate you, calmly reply, “Well, I love you anyway.”

Wait. That sounds so familiar in another context.

Ah, I know. That’s what our patient Father God says to us when we act like willful children, isn’t it? :-)

The first time I was separated from my sister, it was because of a wedding. She married and moved away. I was six years old and, until then, was happily sharing a teeny bedroom with her in our family’s 2 bed/1 bath suburban home in Houston, Texas. We had a partner’s agreement as we crawled into the small full sized bed at night. She read me fairytales and I scratched her back. After she moved I had to adjust to reading to myself and missing my sister. I didn’t fully understand why she had to leave.

Over the decades, off and on, we alternately lived far away from each other and in the same neighborhood. Busy raising our families and managing our lives, during those times when we were not in close proximity, we often lost touch for long periods. With the advent of email we were able to keep up with each other more often than using snail mail. Long distance cost too much back in the day so we rarely talked on the phone.

After she was widowed we were eventually able to live under the same roof. For the last seven and a half years we have been blessed to share daily life with each other as close as two sisters or best friends could ever be.

Our best times were our weekly out-and-about days. We ran errands, poked around in second hand shops, got pedicures and chatted and laughed over lunch at one of our favorite local restaurants. In the beginning of our final partnership, we walked around the property for exercise nearly every morning and then stopped to gather up grand dogs to come hang with us during the day when their owners were off working. Gradually, over time, this routine flatlined as we aged. In the last year and a half, after the dreaded diagnosis, our out and about days slowly went from four stops to no more than two. Daily walking became a distant memory.

And then as the cancer took over our routine became more of a count down, taking each day as it came.

Second only to my brother, George, my sister, Jo, was the funniest person I’ve ever known. Sometimes, as we were driving somewhere, she would say something that would make me laugh so hard, in the interest of safety, I would have to pull over and stop until I could compose myself.

She was a paradox of fretting over anything and yet still able to always see the beauty in everything. She was completely grateful for whatever she had in her glass no matter how little. She never complained or asked for anyone to do anything for her. Ever. She never boasted or wanted attention. Her focus was always outward, not inward. Once, as she was telling me a worrisome story, she stopped and gazed out the window and remarked - “Oh, look! My hibiscus has a double bloom! Isn’t that beautiful!”

As we are now separated one more time, I console myself that, not only will we see each other again, we were gifted with these amazing last years to be together, partnered in the last seven years as we were in the first six. Sharing and caring.