Even in the bright daylight it is dark in here but the eyes gradually become accustomed. Soon a hodgepodge of unrelated, discarded furniture comes into view. Rough wooden boxes occasionally sting and leave slivers in little fingers. There’s a faded yellow rocker, kid-sized, one man's trash, a ten year old's treasure rescued from the garbage collector. There’s an old Hollywood sofa bed. Brown and smelly. A lethal combination of dust and dog. The walls are raw but good for writing on. A name, a phone number. A primitive drawing. The ceiling is bare rafters. Great for suspending temporary fabric walls. Also great for harboring wasp colonies. 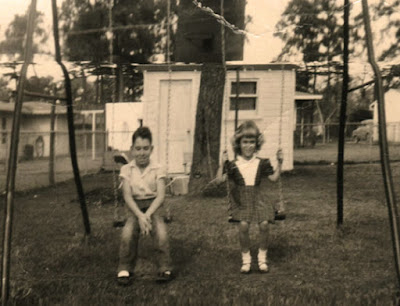 A six foot ladder leans into the corner. The top becomes an entire second floor of a sprawling mansion.

The movie star descends gracefully to the marble foyer and greets her guests. She laughs lightly and charms her way around the gracious ballroom astounding everyone with her wit and cleverness. The phone rings. She accepts devastating news. She excuses herself and retires to her quarters. A grand exit up the winding staircase.

A nice dramatic ending but not as compelling as...

...the Princess imprisoned in the highest turret of the Giant's cold, dank castle. Her golden locks float easily around her shoulders like a silken mantle... [or a bunch of The Mom's old nylon stockings]. She looks longingly out of the window at the tree tops and the misty countryside. She does so need her Prince to come. She passes the time singing sad songs in the most beautiful voice ever known to man. She waits patiently perched for hours on the spot that reads:

WARNING, NOT A STEP.

Arranging, rearranging. Ragged chairs, boxes, little broken tables. Make them fit the daydream. Work around the nasty burlap curtain that conceals the lawn mower but can't hold back the acrid odor of sour grass and gasoline. A concession with The Dad for the shared use of this space.
Arranging and rearranging. The kitchen is a sagging little shelf suspended limply between two wall studs. Jars of tiny bits and pieces of collected things cling together on one end trying not to slide forward to sudden splintering on the rough concrete floor. An old linoleum surfaced counter top is a workspace for the amazing concoctions of grass and mud pies.

A world renown chef humbly accepts the praise for her latest recipe for goulash. The secret ingredient is closely guarded.

Faded crayon marks outline the remains of paths on the concrete floor. Trails through Candy Land. The ladder/mountain/staircase has dried whipped cream on its peak. Some wall studs bear red stripes, candy cane sentinels.
The Candy Land Fairy Princess emerges from her sugar cottage a/k/a Amana refrigerator box that says: THIS SIDE UP. She sparkles and flutters about tending to all the little creatures of the forest. She is so wise and they love her so. She always has the answers.

Except how to open the window which is always stuck. And the other one won't stay open without a stick to prop it. But it only matters in the summer months when the soaring temperature swells up the pine walls and makes the knots weep sticky, amber tears. In the heat, the pine sap and the gasoline fumes mingle and synergize into an explosive aroma.

Outside, the concrete step-up runs the length of the front of the playhouse. A hopscotch grid is permanently etched into the surface. A good place to escape the oxygen deficient atmosphere. An old pine tree provides hit and miss shade to this spot in the afternoon. Lindy, the English girl, brings new games and great skill to this place. She also brings wonderful English books. Us Dogs is read uninterruptedly in the yellow upholstered rocker in one sitting. A sad ending. A new and painful experience full of sobbing, salty, last page tears and delicious desire to read more books.

The librarian is very strict. She is a rock. No noise allowed. No talking, no loud movements. This is a quiet place, a place for reflection and serious study. But an unfortunate incident. Something to do with the entire works of Mark Twain left in the yard. Rain. LIBRARY CLOSED.

Books confiscated by The Mom. Back to the lone reader in the yellow upholstered rocker.

Chairs and tables and boxes in neat rows. A Blackboard. Students of all shapes and sizes and species. One is four-legged, spotted brown and white. She is dressed in a tee shirt and baby bonnet. This is not a happy student. She looks longingly backward towards the door. She has a plan but she is patient.

The teacher begins class. She is brilliant. Math, English, History a little Geography. The teacher turns to write large chalky letters on the blackboard. The student sees her opening and escapes out the door barking wildly at some imagined hostile intruder.  Recess.

Time to swing for a while on the tall swing set in the shadow of the playhouse. Great ideas are sometimes born here where the closest thing to independent flight is often attempted. Pumping and straining every muscle to toe touch the lowest branch on the world's largest pine tree. A tree held together with several pounds of ten penny nails. A little carpentry practice. The Dad always wondering where his nails disappear to. This tree is also keeper of the basketball hoop. No net. Many one-on-one games called HORSE with The Brother who always wins. Swinging higher and higher. This time, so high the chain relaxes at the top of the arc and there is a millisecond where gravity is defied.

Recess over. Back to work. Star student hiding. Never mind. Arranging and rearranging. A boat. A hospital. A cave. A bank. Never-Never land. A home, but only in the daylight. No electricity. Too many dangerous fumes for candlelight.

Dusk ends much more than just the day. There's tomorrow. Another day will dawn on this magic place that inspires exploration, expansion and rehearsal for all the possibilities. It is a parallel universe without limits or boundaries; no dimensions of height, width, or length.

To open the wooden door and cross the threshold is not to enter this old shed, but rather to penetrate the heart and soul of a dreamer.

You are never too old to set another goal or to dream a new dream. ~ C.S. Lewis
Posted by meema at Thursday, September 24, 2015