As Told By A Child 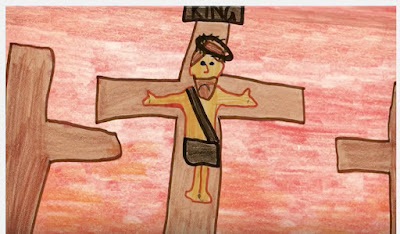 Matthew 28:1) Now late on the sabbath day, as it began to dawn toward the first [day] of the week, came Mary Magdalene and the other Mary to see the sepulchre.  (28:2) And behold, there was a great earthquake; for an angel of the Lord descended from heaven, and came and rolled away the stone, and sat upon it.  (28:3) His appearance was as lightning, and his raiment white as snow:  (28:4) and for fear of him the watchers did quake, and became as dead men.  (28:5) And the angel answered and said unto the women, Fear not ye; for I know that ye seek Jesus, who hath been crucified.  (28:6) He is not here; for he is risen, even as he said. Come, see the place where the Lord lay.  (28:7) And go quickly, and tell his disciples, He is risen from the dead; and lo, he goeth before you into Galilee; there shall ye see him: lo, I have told you.