Michele Morin hosts one of my favorite blogs. To say she is a gifted writer and book reviewer is not even close to describing her skills. Her most recent post struck a chord in me and I had to post a comment.

Parenting Past the Mid-Point

My too long comment could easily have been a post in my blog. But I’m not blogging right now, because. Because sometimes life spikes you to the ground like a volley ball and you have to pause and regroup. But a writer has to write, even if it’s only in her head so I did and then I couldn’t not let it out so I dumped it in Michele’s blog.

And then I was conflicted with posting it in my blog anyway...or not.

In the end, the writer’s war within usually ends with words let loose. 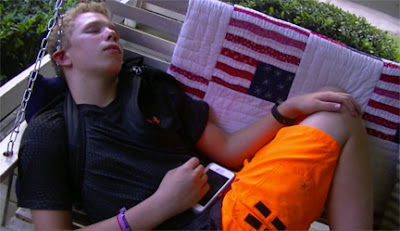 He’s all of six foot one. He’s running as fast as he can toward fifteen. He’d skip it, if he could, and just leap into sixteen. The magic number. The age of freedom to drive. To bust out. To be unleashed. He thinks it means adulthood, but, of course, he isn’t mature enough to know he isn’t even close.

But stuck in this aching-to-be stage, he is a painful conundrum. He’s cocky, sometimes disrespectful, arrogant, over confident as well as sheepish, playful, rascally, full of self-doubt and fear. He puts up a good front but underneath he is mostly insecure. And in his fight with that he oversteps.

He lives big and out loud so he often makes bad choices and has too much money to spend on things he shouldn’t buy. He isn’t old enough, nor experienced enough to realize that being able to do certain things is not a license to do them without restraint. His motto is - live and have fun while you can.

His bravado masks a lifelong struggle to prove himself because he is afflicted with ADD and struggles to keep up with school work. He thinks it makes him look stupid when, in fact, he is quite brilliant in ways others are not. Ask him to fix your computer.

He seems tough and often gives off the wrong vibe even as he is soft-hearted and always was the compassionate kid who comforted the one who was hurt on the playground.

He’s a foaming mixture of all the ways humans develop from infants to adults. He represents the person who, depending on the circumstances of his rearing, could become an evangelist or a serial killer.

He’s a modern teenager with too much stuff, too much freedom, too much exposure to electronic information that he is not mature enough to process.

He’s my grandson. I keep the communication line open and hold on praying that God will intervene during these teen years that have always been tenuous and difficult but now, in this declining age, are downright treacherous.