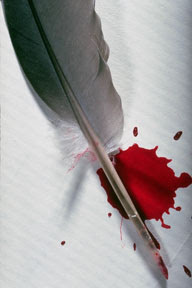 All successful writers know there is a standard formula for crafting a good story. This includes, but is not limited to, developing at least two believable characters who are diametrically opposed to each other.

This has been the way of yarn-spinning since mankind began making up stories, but I’ve noticed a subtle disturbing change in the dynamics of modern fiction. More and more often it seems the “hero” or protagonist is a bad guy to begin with–a thief, a liar, a criminal. This type of hero, usually a social misfit and/or part of a group of misfits, find themselves at odds with an even more fiendish bad guy, (usually someone who is mega rich), and are compelled to rally to the cause of bringing justice to the world by doing in  him and his evil minions.

We, being programmed to root for the protagonist of the story, regardless how questionable of character he/they might be, do our part and align with and cheer for what is tantamount to nothing more than the lesser of two evils. What good is splitting hairs about the dubious character of our hero when the REALLY bad guy needs to be exposed and punished post haste?

This is indeed an interesting twist on a very old technique but it is also an ominous sign of the times. Those who claim that there is no empirical evidence that points to movies, books and video games as being influential to culture, are usually those who make their living off said products.  To know the truth of it, one simply has to follow the money.

Billions of dollars to be had will always trump what might be bad for society in the long run. But money is one thing, there is another, darker, spiritual side to all this–less obvious, of course.

Professional liars, thieves, murderers and other psychopaths, who have no conscience, who do not care what happens to others so long as they get what they want are, by their nature, unable to be genuine heroes in real life. The old saying there is no honor among thieves is actually a fact. Experiments have been tried, during war, to put criminals into dangerous combat zones. As soon as they were able, they bolted, never to be seen again. This is what happens in real life, but through the medium of fictional writing we have been convinced that those who are good at lying, cheating, stealing, murdering and otherwise committing crimes against others are just using acceptable means so long as the end is perceived to be good.  This is simply a very ingenious way to embed new definitions of good and evil into society’s collective psyche. The result is that deception is deemed fine and, in fact, expected so long as it is for a good cause.

This gentle, diabolical technique has finally, effectively blurred the lines between good and evil, what is acceptable and not. We used to know better who or what made a hero and a villain. We used to understand the difference between honor and dishonor–clear  were the definitions of morality, integrity, and honesty. We used to be able to recognize who was wearing the white hat and who was wearing the black hat. Suddenly, it seems there are no white hats. White hats are passé, old-fashioned and out of date. We have come to prefer our heroes a bit more rough around the edges, a tad bit tarnished, way less shiny and, well, let’s say it–more like us. So, instead of seeing heroes as those with traits we would like to rise up to, we bring our heroes down to our level.

There is an inevitable consequence to this new cultural model of idolizing bad behavior as heroic and it seems that we are rushing to the climax of this ongoing story of good against evil. In fiction, evil is always presented as knowing it is evil and is proud to be; the antagonist/villain/bad guy rubs his hands together and laughs BWA-HA-HA, celebrating his beautiful evilness. But evil in real life is not a fictional character, it’s a genuine villain who prowls and seeks to destroy whomever he can while he still can. He  is somewhat more clever than fictional villains though, preferring to make those whom he has garnered to his side believe they are good and right because he knows the best way to suck in more victims is to create the illusion of good and to look good one must believe one is good. These minions speak black truth instead of white lies. They say, “Believe me, trust me, Honest, I am speaking truth!”

The diabolical part is that they have been deluded, by the author of lies, to believe their own words because unlike a white lie, where the speaker knows it is untrue, a black truth becomes real to the person who has crafted it. It is a created reality for this person so it presents itself real enough for others to be convinced as well. Whole belief systems are often founded on nothing more than a single individual’s black truth.

So, how does one recognize black truth in a world where the lines between right and wrong are fuzzy?  Where white lies, black truth and real truth are in the final conflict for the souls of men? The answer is as old as storytelling itself: When in doubt of the veracity of the sayer, pay more attention to what one does than what one says.

To that I must add, for those with eyes to see and ears to hear, measure that action by the Word.

(Ezekiel 33:30) And as for thee, son of man, the children of thy people talk of thee by the walls and in the doors of the houses, and speak one to another, every one to his brother, saying, Come, I pray you, and hear what is the word that cometh forth from the Lord.  (33:31) And they come unto thee as the people cometh, and they sit before thee as my people, and they hear thy words, but do them not; for with their mouth they show much love, but their heart goeth after their gain.  (33:32) And, lo, thou art unto them as a very lovely song of one that hath a pleasant voice, and can play well on an instrument; for they hear thy words, but they do them not.