(1 Thessalonians 5:1-6) But concerning the times and the seasons, brethren, ye have no need that aught be written unto you.  (5:2) For yourselves know perfectly that the day of the Lord so cometh as a thief in the night.  (5:3) When they are saying, Peace and safety, then sudden destruction cometh upon them, as travail upon a woman with child; and they shall in no wise escape.  (5:4) But ye, brethren, are not in darkness, that that day should overtake you as a thief:  (5:5) for ye are all sons of light, and sons of the day: we are not of the night, nor of darkness;  (5:6) so then let us not sleep, as do the rest, but let us watch and be sober.

We were gathered together for a family meal recently and the topic of the Mayan 2012 end of the world thing came up as a philosophical discussion. One of us offered what she would do if she knew she only had one day left. This launched a lively dialogue, each and all enthusiastically lobbing in suggestions for the most optimal way to spend the last day on earth. I listened and laughed along with the group as each contribution got sillier and sillier but I didn’t pull anything out from my bucket list. Though the moment was completely light-hearted it tapped into something I have been mulling over and I knew I’d need time to think about it. I can be as silly as the next guy, but not about some things.

The following morning, I pressed the call button for the elevator that was downstairs. Knowing it takes twenty-one seconds for this small movable closet to transition between two floors, I chose to use the interim to walk over and raise the shade on the front window. With at least nine seconds to spare I decided to walk further and raise the shade on the other front window. The elevator arrived and I walked back and opened the door. On the twenty-one second ride down I suddenly recalled the dinner conversation and all the ideas presented about how to spend the last day on earth.

I thought, Last day? What about the last seconds? 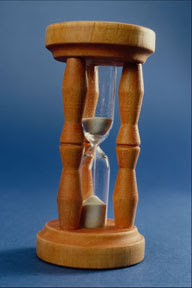 Although time can be measured with some precision, we prefer to think in terms of less specific numbers. Twenty-one is a real number but it’s too exact. Most would round up or down - twenty, or less than a minute. If asked how much we paid for a thing, we’d likely respond “ten bucks” instead of “nine dollars and ninety-nine cents”. It’s easier and, well, more flexible to think about the numbers of our lives in increments that are generally representative and therefore more conceptual than actual. But this, then, sets the precedence for us to think of our lifespan as more conceptual than actual as well.

Vague and hazy is just more imaginative and open for broad speculation. In other words, there’s nothing concrete on the calendar so, eat drink and be merry.

Here’s where vague and hazy must come into sharp focus.

As much as we would like to ignore the fact that there are absolutes in life, there is one that ought to be addressed sooner better than later. Counting backwards, from the very last beat of our heart, it can be said, irrefutably, that we all are appointed one last year, one last month, one last day, one last hour and, yes, even one last increment of twenty-one seconds.

The catch is, unfortunately, we rarely, if ever, know when that last twenty-one second countdown has begun. Twenty-one seconds is not enough time to think about and then execute how it ought to be spent. Who wouldn’t want to do something significant? But what? What meaningful thing can one do in twenty-one seconds?

For things that I have said and done that grieved You,
for all the things I didn’t say or do that would have pleased You.

I wish I had more time to pray,
that Your will would be my only way.
So in this last second please hear me say,

Forgive me, Lord Jesus, forgive me.

...and you’d still have three seconds left - just enough time to look up.