My youngest daughter had a childhood friend who had an annoying way about her. Holly and her best friend Susan used to complain regularly that Cristin made them crazy but they couldn’t exactly explain why.

One day I overheard them ranting about something Cristin had said or done and I asked them to tell me what. Holly fumed that Cristin said things that sounded like she was giving compliments but ended up being the opposite. She gave an example that Cristin said, “Oh, that’s a pretty shirt but it’s kind of a funny color isn’t it?” Or she’d say, “I really like your room but the carpet is kinda old, isn’t it?”

At the time, I didn’t have a psychological diagnosis for Cristin’s conduct but I knew instinctively that confronting her would not net good results so I sat the girls down, “Here’s what you do,” I told them, “The next time Cristin gives you a backhanded compliment just act as though you’ve really been complimented. For example, say, ‘Oh, thank you, Cristin, what a nice thing to say.’ ”

Empowered, the girls took my advise and started countering Cristin’s two-edged accolades with the sweetest, if not somewhat affected, responses. A few weeks later, one day, Holly came rushing in with the latest ‘Cristin Report’.

“Mom! You won’t believe this!” Holly-All-Eyes tattled. “Cristin said she liked my hair but that my bangs were too short and so I said,  thank you, Cristin, what a nice thing to say, and wanna know what she did?”

I nodded, wide-eyed myself, holding my breath.

“She started yelling at me!”

“Yelling what at you?” I asked.

I smiled. “Gotcha,” I thought. And then I said, “So now we know for sure she knew all along that she was being unkind but doing it in a way that sounded nice and now you also know the best way to make her stop is to not let her get your goat. What she wants is to make you lose your cool and then she can act as though she doesn’t have a clue why you are so mad and behaving so badly.”

I’m sure my approach to dealing with Cristin would not win the touchy-feely parenting award but it worked and taught Holly and Susan a valuable lesson. Cristin kept her mean-spirited compliments to herself, or at least she stopped dishing them out on Holly and Susan. Of course, I’ll never know if the exercise taught Cristin anything other than to choose her marks more carefully. 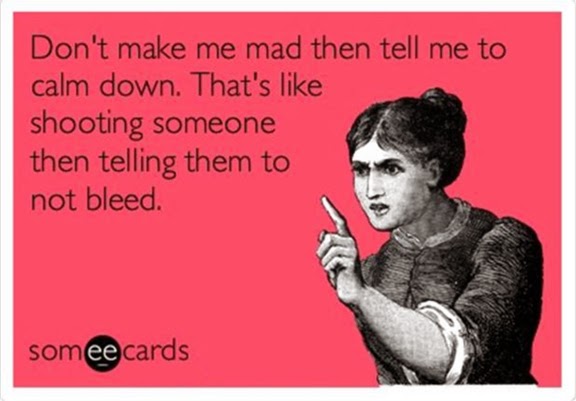 Sometimes I do wonder if that little girl grew up out of her habit of smiling sweetly even as she was cutting another down to size or if she just took that passive/aggressive nature into her adult life with her. I truly hope for her sake she figured it out. Unfortunately, this state of being seems to be epidemic nowadays. People say good things even as they are doing bad things, manipulating, using and pushing others’ buttons to get them to react negatively so they then can float gently above the strife as though they are either the victim of the negative behavior and/or certainly in no way a party to it. Blame-shift is another tool of, but not limited to, the passive/aggressive personality. Others and their bad reactions are always at fault for contention, but not them. Never, ever, them.

We are admonished to be meek as lambs and wise as serpents. The key to following this is discernment which is a vital asset to have while living in a fallen world. Combined with faith, prayer, and lots of grace, we muddle through as best we can. Now that there is an official diagnosis for people who suck others in only to stir them up to get them to behave badly, the solution is still the same–simply do not participate. When someone is aggressively kicking up dirt to cause a storm, all the while passively denying their feet are even moving, the best way to diffuse it is to either not respond or respond with kindness. Even if the kindness is somewhat disingenuous, it’s still better to end a conflict before it can begin than to fall prey to the tactics of a passive aggressive war monger.

Meema’s Practical Life Lessons 101: Give the devil no wiggle room.