Image of the Beast

This one is likely to get me in trouble but though I hate to be the sounder of the alarm, I am well past the point of holding back what ought to be said for fear of offending or confusing. I’m not doing this for applause anyway. Further, I’m not expecting a consensus on this topic either. In fact, I will be shocked if anyone even understands what I am trying to sound the alarm about. Outlier is one of my many middle names.

Just in case some might get it, this is for those. 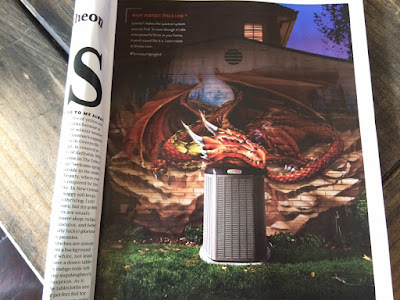 This morning, flipping through a well known home style magazine I came upon a full page ad. Full page - meaning margin to margin top to bottom. It was  a very dark photo of the side of a house centered around an HVAC unit.

Well, yes it is a very big deal if one is paying attention to the growing shift of imagery from light to dark that is now seeping in around us in every way that visual stimulation and mindless impression can besiege and inundate us all day long.

The big deal is not about the HVAC but the painting on the brick wall behind the HVAC–a giant red dragon whose menacing face appears to rest on the top of the condenser, which is the product and supposed reason for the page.

So, it’s just an advertisement that is supposed to depict how this heat/air system quietly and forcefully resides within a house. Like a red dragon. Isn’t that what  everyone wants residing in our houses?

Our minds? Our souls?

Unlike most advertisements that fill the page with words the image does all the talking. There are a few words but they are so small and faint in the upper left hand corner you need a magnifying glass to read them. The art really says it all and the point and innovative style is pretty slick if you’re thinking in artistic terms.

But if you’re looking with spiritual discernment the choice of imagery for delivering the message is so diabolical that only those will see the subliminal message who know how social engineering works through gentle persuasion via the ‘feeling senses’, through arousal of emotions, tapping into the sensual side instead of intuition or common sense side of human transformation.

I’ve been watching these slow pullings for a long time now that coo rather than yell to attract interest to the dark side away from the light. Fascination with witches, demons, vampires presented in fiction as ‘misunderstood heroes’ until at last we have come to believe good is evil and evil is good.

Even five years ago I would have hesitated to point out what I was already beginning to recognize because no one likes to be the grumpy nay-sayer all the time. It’s tiring. But I now see a rapid increase and it’s worrisome. Children  in the digital age receive indoctrination via all the visual stimulation poured out on them daily. No words needed. Well done, award winning animated movies and cartoons have been slipping into darker themes for some time now. But the dark is hidden inside light packaging so as not to scare the littles.

Where does it end? When is the conversion complete? Perhaps with the construction of monuments in 1000 major cities around the world, beginning with New York and London on April 19. Monuments honoring Baal, the god of child sacrifice.

But the question is begged - is art an imitation of life or is it the other way around?