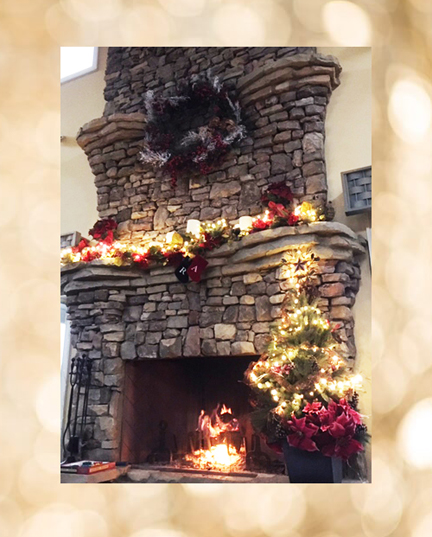 On this Christmas Eve, sitting by a morning fire, sipping coffee, instead of contemplating all the ways we celebrate the birth of our Savior, my thoughts are mulling on the parable of the talents in Matthew 25:14-30.

A master is going away so he leaves three servants with responsibilities (talents) according to their abilities. One he gives five, another he gives two and the last he gives one. The story unfolds with the first and second servants doubling what they had and the last, who was fearful, burying his, thus doing nothing. The master returns and  praises the first two servants, ‘well done good and faithful...’ but not only chastises the third, he removes his talent and gives it to the first.

(29 For unto every one that hath shall be given, and he shall have abundance: but from him that hath not, even that which he hath shall be taken away. 30 And cast ye out the unprofitable [servant into the outer darkness: there shall be the weeping and the gnashing of teeth.)

These are not just tough words by the new standards of a touchy-feely era, when misbehaving and bad choosing becomes sympathized with, excused and enabled, they are fighting words. Those who find the idea of accountability as harsh, unforgiving and therefore reprehensible, will stand up and speak out against such ‘miscarriage of justice’ and even be lauded for their good mask of righteousness,

The problem, of course, is that our limited concept of justice can never be God’s. What is that old saying? Never confuse the will of the majority with the will of God.

And what does this have to do with Christmas one might ask? Well, everything, actually. You see, Christ came to save us from ourselves. From our weaknesses, our myopia, our determined will to substitute SELF as God. He came as a babe, both human and God, so that He could experience our humanity and all the ways we can fail. He came to make a way for us to overcome it all. He took the tough 999 steps  so that all we have to do is take the 1.

On Christmas we celebrate this incredible gift given to us by our Creator by the symbolic giving of gifts to others when what we really need to do is give back to Him by doing what the first two servants did with their talents - multiplying them. God doesn’t need our good words and intentions, like the third servant who held back, believing he was doing the right thing because it quelled his fear and thus justified his choice in his own mind.

All God needs is for us to simply acknowledge what we have been given and then actively turn our little into much.

This parable is often misunderstood and equated with worldly symbolism, like money and things. But what it’s really about is demonstrating the power of one-on-One and asks the question - what do we, as individuals, do for Him with what He has given us?

That’s what I’m pondering here on Christmas Eve morning 2016. What can I give Him, besides good sounding intentions and words, not just today, tomorrow, but next week, next month, next year...?